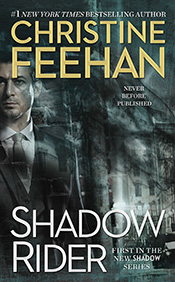 The #1 New York Times bestselling “queen of paranormal romance”* is back with a sexy new series starring a Chicago crime family that hides a dark, mystical secret...

Whether it’s fast cars or fast women, Stefano Ferraro gets what he wants. When he’s not fodder for the paparazzi, he commands Ferraro family businesses—both legitimate and illegitimate.

While their criminal activity is simply a rumor yet to be proven, no one knows the real truth. The Ferraros are a family of shadow riders capable of manipulating light and dark, an ability Stefano thought ran in his family alone—until now…

With little left to her name, Francesca Cappello has come to Chicago in hopes of a new life. She wasn’t expecting to attract the attention of a man with primal hunger in his eyes, driven to claim her as his to protect and to please. And if he discovers her secret, it could ruin her...

I've loved Christine Feehan's books for many years so when I saw she had a new series, I knew I had to read it. This is the first book in The Shadow Series.

Francesca ran away from her life with a little help from her best friend and now she's living near her best friend and hoping her friend can help her get a job and get back on her feet. Something terrible happened to her and she's scared that someone else might find out and then the people after her will find out where she is and she'll have to run again.

Stefano takes care of his family, his town and those living in his town. He's got the respect of everyone living under his protection and some even fear him and his family. He's rich, good looking and lethal. A potent combination for sure. He was on his way out when his gut told him to stay and he's glad he listened because right away he knew that Fransesca was his.

Stefano and his family get hired to help or get rid of people that only they can get to. Their family has a secret...they can ride the shadows, unseen, unheard until it's too late. You can't run from them because as long as there's a shadow, they can get to you. Which makes them very deadly or very handy...depending on why they get hired.

Stefano is used to getting his way...all the time. At first it was hard to like him because he's bossy, controlling and will do as he pleases as long as he thinks he's doing it for the right reasons. His brother's are somewhat the same way but he's more feared than they are. I didn't think he really went about getting to know Francesca the right way or letting her know that he was just trying to help her. He gave an order and he expected her to follow it like everyone else would have. He's not used to anyone not doing what he tells them to do. That's why I like her, she doesn't always do what he wants and she even gets in trouble for it but I think that's good for him. He really needs to loosen up a little bit and I hope in the upcoming books in this series that we see him loosen up a little and see that he's not as controlling and stubborn as he seems to be in this book.

Stefano finds out her secret and helps her get rid of the bad people who have invaded her life and her nightmares. This is a dark, gritty story and the characters oftentimes come off as brash, controlling and domineering. The only saving grace for Stefano and his brother's domineering attitude towards women and those they protect, is the fact that you can really tell they love those around them. They really do care what happens to the people in the town and they go out of their way to make sure everyone, even the homeless woman is taken care of. If you look past their attitudes and bossy natures, you will see a very caring family. Even Stefano's mother had a scene where we get a small look into why she's the way she is.

I'm really looking forward to seeing how the other brother's find their women and how the sister is treated when she finds the man she wants to marry. I already have an idea who she's going to be marrying and if you really read between the lines while carefully reading this book, I bet you will too and I know they'll be fireworks when the brother's find out. I can't wait. If you'd like to read this one for yourself, you can find it here.