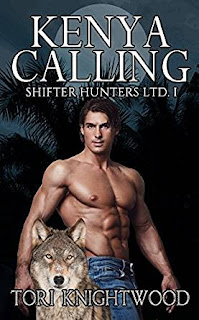 Tragedy made her a shifter hunter. He would die to protect his family’s secrets. When business brings them together in Africa, sparks and claws will fly.

Ryenne Cavanagh is a kick-ass shifter hunter in a world where most shifters are law-abiding, but rogues like to make trouble. Successful in a male-dominated field, Ryenne doesn't take shit from anyone. Especially not from shifters.

When a rich Kenyan businessman hires Ryenne to protect him and his entire village from a rogue leopard shifter, she soon finds herself the target of the most cunning rogue she's ever faced. Worse still, her new client forces her into competition against a sexy French shifter hunter with a dangerous secret. She needs to solve the case first or lose her fee. Despite their rivalry, the French hottie is breaking down the protective walls built around her heart since she lost her brother and father.

Will she uncover the identity of the rogue first or lose her heart along with her fee? More importantly, will she bring the rogue to justice before she becomes his next victim?

The Shifter Hunters Ltd. trilogy is filled with action, adventure, and steamy love scenes. It is intended for readers aged 18 and up. Kenya Calling does NOT end with a cliffhanger but is only the first part of the story.

This book is a novella, the print length being 147 pages. So if you're in the mood for a quick read this is a good pick. This is book 1 in a 3 book series.

It's Ryenne's job to track down and stop rogue shifters and stop them before they kill innocent humans or turn them into shifters. Ryenne and her partner get hired by a businessman in Africa who gives them half their fee to find the rogue shifter that he thinks wants him dead. Ryenne is the one to travel to Africa and deal with the rogue shifter but he or she is harder to find than Ryenne first thought they would be.

Along with Ryenne and her partner being hired, the businessman also hired another hunter and whoever finds the rogue shifter will get the second half of the payment. Of course she's not happy about this little twist of plans but she agree's because she thinks she can find the shifter before the other guy does.

Lucian is the other hunter that is hired and even as he's there to do a job, he finds himself attracted to Ryenne. He has a few secrets that are shocking to Ryenne when they come to light but she still has the hots for him.

There is a slow building romance. I call it slow building even though they jump each other's bones pretty quick but they don't really know much about each other. But as Ryenne and Lucian get to know one another and find out who the rogue is, they face a lot of danger and it brings them closer together.

I loved the twist that came towards the end of this book. I kinda saw it coming but it was still a good one and just when I thought I had this story figured out, another twist is thrown at us and it's a good one!