Review: The Shifters of 2040 by Ami Blackwelder 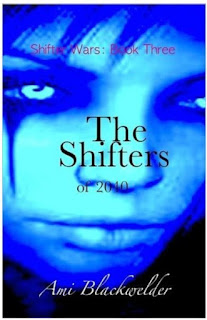 America 2040. Three Species. Divided Lovers. The Race is on for Planet Earth.

Set in Alaska in 2040, Melissa Marn and Bruce Wilder must work under the iron fist of the SCM, while still try- ing to maintain humanity. Discovering a world of shifters and hybrids, the scientists must struggle with human prejudice and betrayal. With the original ancestors, dubbed shifters, still living on earth, humans are in the midst of a fifteen year old war. As the eldest hybrids, Unseen and Diamond, learn about humans the hard way, with the loss of loved ones and sacrifices, love on planet earth proves challenging.

This is the third book in this series but I haven't read the first two so that could have something to do with how lost I felt at first. It felt like I was missing small pieces of this story but not enough to really make a difference.

I don't usually read emotionally charged books that pull at my heartstrings because I don't really care for stories that make me sad and this book made me sad. This story is all about what happens when aliens who have to leave their planet for one reason or another end up coming to Earth and how we treat them once here. Of course the military gets involved and that causes one big clusterfuck after another but I have a feeling that would be the case if aliens really did come here and maybe why they've stayed clear of our planet. Anyway, we are not welcoming and some of the aliens go into hiding. Fast forward 20 years later and some of the male aliens have mated with human females giving birth to hybrids and the military are still after them.

The aliens or shifters just want a chance to live but the humans aren't having it. Along with the military personnel that made me want to throat punch a few of them, there are the scientists *who  I also wanted to throat punch* just want to experiment on them.  This story tore at my heart and kept me up reading well past my bedtime. Humans made it almost impossible for the shifter aliens to be able to have a safe, happy life. But they still tried. This book was well worth the read.