Review: Seduced By The Alpha Wolf by Kaycee Kline 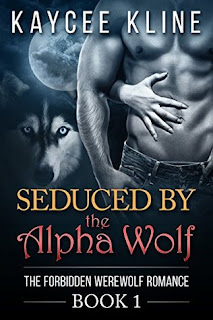 A torrid, steamy retelling of Beauty and the Beast, 'Seduced By The Alpha Wolf' is sure to hook readers until the very last caress.

An out of place college student who feels completely alone in her world, Marie Damascus answers an ad posted online requesting the help of a maid.

When she discovers her potential employer, Adrian Capitoline, is the man of every woman's dreams—a sexy, mysterious, billionaire—she thinks she's encountered a miracle.

She's quick to become his live-in maid, and delighted when a sizzling romance begins to develop between the two of them. Until night falls, and Marie must learn that even the gentlest man has a beast—and that she might very well like it.

As Marie fully embraces the nature of her sexual awakening with the man of her dreams she soon finds that she must come to terms with her desires for the monster within him. At the hands of a beast so powerful, she finds herself helpless, and can't manage to admit to herself how much she loves it.

But when Adrian questions her strength of conviction, she decides to take her power back in the same way the wolf has taken it from her.

WARNING: This book contains adult content and is meant for 18+ readers only.

Marie needs a job because she's broke, so she answers an ad to be a maid. Adrian had a lot of money and a huge house but he's a bit of a recluse because of his, 'condition'. He's looking for a live in maid and Marie takes the job. Adrian and Marie get a long really well right from the first day and even though Marie is a virgin, they fall into bed very fast. It seemed like they were both so starved for attention and love that they fell for each other really fast. Things were going so well between them and Adrian tells Marie to stay away from his roses because they are fragile but one night when she hears a sound outside, she makes her way to where the roses are and finds Adrian's werewolf half there.

Now is it just me or would you think that anyone who sees a werewolf walking upright and talking to them, would have a little freak out? This girl doesn't freak out at all that a seven foot werewolf is walking towards her, talking to her and then has sex with her while in his animal/beast form. Sure, that's completely believable. *eyeroll*

While Adrian is a sweet, loving guy, his werewolf half is an ass. The two halves are two completely different personalities and Adrian can't stop the werewolf from doing anything when he's in control. At first I thought that it was weird that Marie would want to be with the werewolf but he really did have his own personality and he grew to really care for her and as she did for him. He was able to talk while he was in his wolf/beast form which was weird but it worked for this story. Marie had to come to grips with both sides of Adrian if she wanted to have a real relationship with them/him.

So while this shifter story was a bit different and I thought they fell for each other much too fast, it ended up being a decent read.