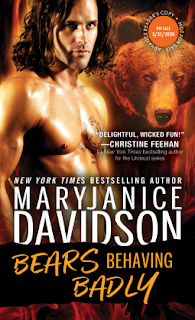 Werebear shifter Annette Garsea is a caseworker for the Interspecies Placement Agency. When a selectively mute and freakishly strong teen werewolf is put in her custody, Annette has to uncover the young girl's secrets if she's to have any hopes of helping her. And not even the growling of a scruffy private investigator can distract her from her mission...

Bear shifter David Auberon appreciates Annette's work with at-risk teen shifters, but he's not sure if her latest charge is so much a vulnerable teen as a predator who should be locked up. All that changes when he, Annette, and her motley band of juveniles find themselves dodging multiple murder attempts and uncovering a trafficking cartel that doesn't just threaten the kids, but risks discovery of the shifters by the wider world of homo sapiens.

Annette works at a shifter placement agency and helps shifter kids when they get in trouble or need a home. She's been lusting after David who works in her office but they've never dated.

David works in the same building as Annette and has feelings for Annette so when they work on the same case and it seems that someone is after them for some reason, they get closer and get to know one another.

When teenager, Caro mauls a guy and ends up in custody but won't speak, it's up to Annette and David to find out what's going on. Once Annette and David start their investigation and find out that Caro was tortured and abused and that's why she went after the guy, they find themselves in danger more than once.

They find themselves in the middle of a bunch of bad guys, child abuse, and maybe officials who are in on all of it.

The romance between David and Annette was a slow burn throughout the book but they are so cute together because neither of them knows the other likes them. It was fun watching them get to know one another and see who makes the first move.

The secondary characters and the kids in this story really had big parts and made the story what it was. While a lot seems to happen in this book and there's a lot of dialogue, it's quite drawn out and a little boring at times but it was a good story.

Disclosure: I was given an ARC via NetGalley in exchange for a review but all opinions and thoughts are my own.
Posted by Mary Kirkland at 12:00 AM