Review: The Protector by Abigail Owen 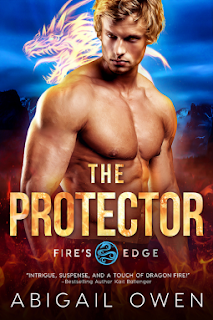 Book Description
The cousin of the High King, Lyndi Chandali has lived with the constant threat of being pawned off as a political prize. A rare, female-born dragon like Lyndi can’t truly mate—not in the way it counts. Which is why she's kept her distance from a certain sinfully delicious Beta. Instead, she's built a life for herself giving orphaned dragons in the Americas a home.
As Beta of his team of enforcers, Levi Rowtag is a fighter first, last, and always. His job is to protect—his team, the shifters in his territory, and the stubborn woman hell-bent on fighting with him at every turn. He knows from the moment they first meet what she’ll never accept—they are destined to be mated.
But with the kings at war, the enemy is now coming for Lyndi. Worse, he’s coming for her orphans, too. He’ll have no choice but to defy his king and go rogue if he has any hope of protecting them all...and finally claiming his mate.
My Review
Lyndi is a female dragon shifter and females are sterile so her mating would usually be political because she is a cousin of the High King. But the High King is a nice guy and hasn't made her mate anyone. As soon as Lyndi meets Levi though, she feels something for him right away but she misinterprets how he acts around her at first and pushes him away every chance she gets for 200 years.
Levi meets Lyndi when she and her brother comes to help his clan. He knows pretty much right away that she is his mate but because of the way he acts towards her, she thinks he doesn't like her when he's really just trying to hold his dragon in check.
Neither one has any idea that the other feels the same way about them and Lyndi being sterile and not being able to mate him the way a human female would makes her believe that she's not good enough for him anyway. It isn't until he gets called back to his clan and a male dragon shifter from another clan comes to claim Lyndi, that they both let their feelings show. At that point there was no way that they were letting each other go, but that's also when all sorts of things get in their way and it looks like there will be a war or at the very least a lot of trouble with other clans and maybe even Levi's gold clan leader.
I really liked the orphan dragon shifters that Lyndi has taken in and cares for and how much they care about her. There were a few surprises and a lot of great action scenes. So much has happened in this series and even more happens in this book. I cannot wait for Rune's book and it looks like his will be the next book in this series and I'm so looking forward to it. I always enjoy the books in this series and that's what keeps me coming back. All I can say is if you haven't started reading this and you like PNR, you really need to pick up the first book and start reading it.
I give this book 5 out of 5 stars.
Disclosure: I was given an e-ARC via NetGalley but all thoughts and opinions are my own.
Posted by Mary Kirkland at 12:00 AM