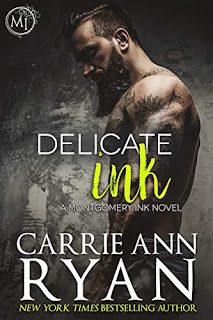 Book Description
NYT Bestselling Author Carrie Ann Ryan begins her binge-worthy Montgomery Ink series with a bachelor ready to finally settle down and the one woman he shouldn’t have.
One look at the woman who comes in for new ink and Austin Montgomery knows she’s the one for him. The problem: she can’t stand him. Now he’ll have to be his most charming and brooding if he has any chance of changing her mind…and claiming her heart.
Sierra Elder has reasons for keeping away and secrets close to her heart. An accident took her first love and scarred more than her soul in the process. Now the inked man with a wicked grin is starting to melt the ice she’s built to keep her safe, but the danger isn’t only from what she feels.
Some secrets were never meant to be kept and when mistakes from both of their pasts come knocking, they’ll have to trust each other, even if it could hurt them both in the process.
My Review
Sierra is scarred both mentally and physically but she moves and opens her own boutique. When she decides to get a tattoo to help cover the scars on her side, she comes face to face with Austin who is at first really gruff with her because he's having a bad day and because his ex won't leave him alone.
Austin is a big, bearded tattoo artist who has tattoos himself. So when Sierra walks into his shop and he thinks she's looking her prim and proper nose down at his appearance, he lashes out in a gruff manner. But Sierra is no push over and thinks Austin is good looking even if she doesn't like him.
When Sierra comes back for her second appointment to the tattoo shop, she has to talk to Austin who is going to be drawing her tattoo for her. He apologizes for how he acted the first time they met and she feels a little better talking with him. She might be a little reluctant about showing him her scars right away but he puts her at ease and tells her he can still do a drawing for her and she can show him her side when she feels more comfortable.  By the time they are done, he's asking her out and she accepts. She calls to cancel when her window gets broken but he comes to her rescue and after fixing it they fall in bed pretty fast.
He seems to sense that she's a submissive and since he likes to go to a BDSM club and is a Dom, he lets her know what he expects. I actually like him even though at times he seems like a jerk. There is all kinds of family drama, secrets, a cancer scare, a crazy ex that won't eave Austin alone all the while they are trying to sort out what they mean to each other.
As if there weren't enough drama going on, people from Sierra's past start trying to cause problems for her and a new family member shows up out of the blue. I just felt like there was a lot going on in this book. I did like Sierra though, she is so kind-hearted and strong that I really took to her right away. I really thought that Austin and Sierra fit together really well. While the book was good I thought there was a lot of unnecessary drama thrown in.
I give this book 3 out of 5 stars.
Posted by Mary Kirkland at 12:00 AM