Review: Mile High With A Vampire by Lynsay Sands 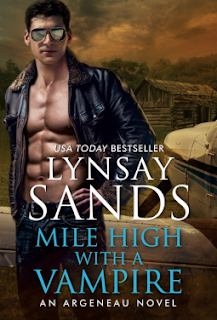 Book Description
In the latest Argeneau novel from New York Times bestselling author Lynsay Sands, an immortal and her mortal pilot are on the run from hungry vampires...and discover they’re life mates along the way.
Jet Lassiter likes being a pilot for Argeneau Inc. Perks included travelling to exotic locations and meeting interesting people, even if they are the blood-sucking kind. He’s living the good life, until his plane goes down in the mountains and four of his passengers are gravely injured. They need blood to heal... and Jet is the only source.
Quinn Peters never wanted to be immortal. Once a renowned heart surgeon, she was turned against her will and now she has to drink blood to survive. Before she can ask how her “life” can get any worse, she’s in a plane crash. One of the few survivors, Quinn is desperate to get the mortal pilot to safety before her fellow immortals succumb to their blood lust and drain Jet dry.
But hungry vampires are the least of their worries—the crash wasn’t an accident, and someone is trying to kill Quinn. Will she and Jet find their happily ever after as life mates, or will her assassin find her first?
My Review
Jet and his friend pilot the plane but when a crash happens and Jet's friend dies in the crash while he was unconscious, he can only thank the guy for getting most of the plane down in one piece.
Quinn and other immortals (think vampires but they don't like being called that) are on the plane when it crashes. Jet is a mortal and some of the immortals are hurt really bad, they are in desperate need of blood so that their nanos can repair their bodies. So Jet is in real danger from them because at this point they are little more than mindless killers. Getting the mortal to safety while the immortals are trying to get at him for his blood is really tricky but Quinn is there to help him make it to safety.
Once they finally get to safety, it's time to figure out what happened to cause the plane to go down. At first everyone thinks it's just an accident but little by little they piece together an entirely different situation. While they are investigating who might want to kill someone who was on the plane, a huge secret is uncovered and now one of them is in serious danger. Quinn and her sister had something terrible happen to them when they were kids but Quinn has packed those memories away and has a kind of amnesia about the whole thing. Once the veil is lifted from her mind and the bits and pieces come flooding back, her whole life started to make more sense to her.
All the while the investigation into the plane crash is going on, Quinn is trying to piece together her memories and some super secret, ancient group is out to get revenge...Quinn and Jet are trying to make sense of the feelings they have for each other.
This book was a continuous line of danger, action and romance, time and time again. The danger was real and had me on the seat of my chair as I didn't know how or if they were going to find a way to safety each time something bad happened. But the romance was sweet and hot! This book was hard to put down, so I didn't and devoured it in one sitting.
I give this book 5 out of 5 stars.
I received an e-ARC via NetGalley but all thoughts and opinions are my own.
Amazon
Posted by Mary Kirkland at 12:00 AM