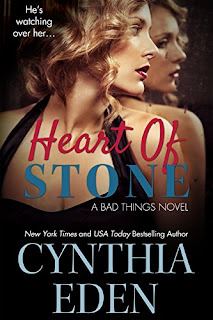 Book Description
She was created to tempt…and enchant.
Sabrina Lark is a muse who has the ability to inspire any man…to do absolutely anything. Unfortunately for Sabrina, the latest human to fall under her spell has turned out to have one very dark side. Now he’s obsessed with her, and she’s realized—too late—that she just inspired a serial killer. She truly has the worst luck in the world.
Desperate, Sabrina makes a deal with the devil in order to get some serious paranormal protection. Her protection comes in the oh-so-sexy form of Adam Cross, a man who is able to resist her magic…because Adam really is made of stone.
He’s a real beast on the outside…
Cursed centuries before, Adam is a gargoyle. Fierce, strong, and absolutely unstoppable, he is the guard who is placed at Sabrina’s side. He’s supposed to protect her from every danger…he is not supposed to find himself falling under the seductive Sabrina’s spell. But even a man with a heart of stone can find himself pushed too far…
Sabrina thinks she may have found the perfect lover, but Adam’s past is about to come back and bite them both…and he may not be the man she can trust, after all. If she can’t find a way to touch the man inside the beast, if she can’t make his stone heart burn for her, then they’ll be lost.
My Review
Sabrina is a muse and inspires people to be their best selves but sometimes the people that fall under her spell are bad people and her powers bring out the worst possible sides of them. So now Eric, a serial killer is after her because she inspired him to be his best self and that made his serial killer tendencies come to life.
Adam is sent to keep her safe and eliminate Eric, who is after her but Adam is a gargoyle so he's immune to her powers which makes it easier for her to be around him since she doesn't have to worry about him falling under her influence.
Sabrina and Adam are both the last of their kind so they have that in common and they are attracted to each other pretty much right from the start. Sabrina could see his aura which scared her at first because she thought he was dark and bad but Adam isn't all bad. I really loved how they spoke to one another, they were so much fun!
Adam is kept on his toes when her ex comes after her time and time again and he can't find a way to kill the man. When Sabrina puts herself in harms way to save not only a victim but Adam, he's really not used to having anyone care about him like that and it amazes and infuriates him.
I love gargoyles and I don't see a lot of them in the books I read even though I read a lot of paranormal type romance books, so I was really happy to see a gargoyle in this one. There were a lot of twists and plenty of action in this story to keep me engaged and waiting to see what would happen next.
I give this book 4 out of 5 stars.
Amazon
Posted by Mary Kirkland at 12:00 AM