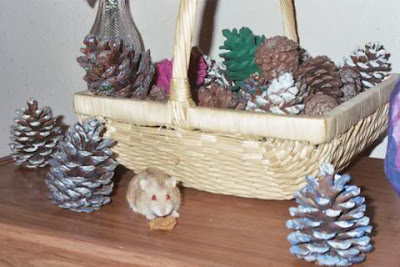 I was thinking back on all the animals I've had over the years because I was trying to come up with an idea for an article and nothing was coming to me. So I started looking through old pictures and remembered that back when I was a teenager I had hamsters that I didn't have photos of and one particular hamster gave me the scare of my life.

I had a Syrian hamster named Crystal when I was 14 years old. We lived in California and when the fog rolled in, it could get quite cool in the mornings. Well, I didn't know that if a hamster gets cold sometimes they will go into hibernation mode and Crystal did. So I thought I would share what happened with Crystal.

Why Do Some Hamster Hibernate

I was 14 years old and my brother and I had 2 Syrian hamsters. My very first hamsters. I named mine Crystal and found out much later that Crystal was actually a boy...but I kept his name Crystal because I was 14 and it didn't make any sense to me to change his name. We got the hamsters from a neighbor who no longer wanted them and after a while I was the one to take care of both hamsters because my brother lost interest, but I didn't.

One cold morning, I went over to Crystals cage and he wasn't moving, I tried to share my cereal with him like I did most mornings, but he had passed away...at least I thought he had. Imagine my surprise while I was sitting there holding his limp body in my hands, crying my eyes out...he moved!

It was really slowly at first and I had no idea what was going on and neither did my mom. So I wrapped him in a little dish towel and warmed him up because that's the only thing I could think to do and after about an hour, he was up walking around again. He was slowly walking around but he was walking. I put him back in his cage with the dish towel and he slept for a while and when I got home from school and went to his cage I saw he was breathing and sleeping so I waited until that night when he usually woke up to see if he would come out to play, which he did and he seemed fine.

I didn't find out until recently that hamsters will sometimes go into a hibernation mode if the the temperatures drop suddenly and that's what must have happened with him.
Posted by Mary Kirkland at 4:30 AM