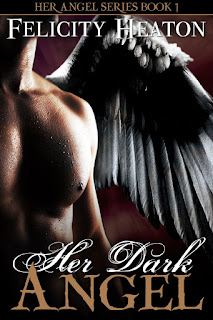 Her Dark Angel (Her Angel Romance Series Book 1)
An angel trapped in Hell for centuries, Apollyon is tired of guarding the Devil. He longs to break free and feel the wind in his feathers, but he cannot leave the endless darkness without permission from above. When he senses someone calling him, he seizes his chance for freedom, but soon discovers the call came from a beautiful woman he has watched over from Hell, a woman who casts a spell on him and awakens the darkest desires of his heart.

Serenity is shocked when a wickedly sensual black-winged angel shows up in her city of Paris claiming that she called him when she was only casting a simple vengeance spell. He’s no other than the angel of death! When the lethally handsome warrior offers to obey her and give her revenge, Serenity can’t resist the temptation, but can she resist the forbidden hungers the dark angel stirs in her?

Intense and passionate, Her Dark Angel is a tale of desire and deepest forbidden love guaranteed to set your heart racing.

Serenity is angry, so angry in fact that when she wishes that she could get revenge on her bastard cheating ex boyfriend, Apollyon hears her all the way from hell. After being trapped for so many years he leaves to find out who's calling him, only to be surprised to find it's the woman he's been watching and kinda lusting after. Serenity is a witch which is probably why he heard her calling him but what she doesn't expect to see is what she refers to as the Angel of Death. And although he might look like a black winged Greek God, meaning completely yummy! When she first see's him, she thinks he's there to kill her.

When she finally calms down long enough to hear what he has to say and realizes that he's not there to kill her but to grant her wish of revenge...off they go to find the ex. But while combing the clubs, dancing and trying to make the ex jealous, they find themselves falling hard for each other.

If you like sizzling sex scenes, big black wings, witch's and angels, then this might be the book for you.

If you'd like to get this book, you can do so here.