Review: She Speaks To Angels by Ami Blackwelder 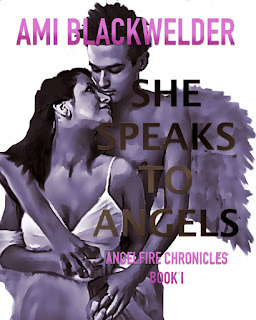 She Speaks to Angels edited by Connie Webb and Ashely Egan and my Alpha/Beta readers!

"I tried not to sound hysterical, but it’s not every day you find out the paranormal is hunting you."

What if everything you believed was a lie?

A Suicide
Seventeen year old Allison Maney attends Millennium High School in Manhattan. Nothing out of the ordinary, unless you consider the occasional suicides at the school. At least that is what everyone is told, what everyone believes. But Tommy Bachelor was a popular football player; why would he jump off the roof of the school?

Dangerous Liaisons
When Dameon pays attention to Ali, she couldn't be more excited, because for the past three months he was all she could think about. But now that Dameon is finally pining for her affections, she is becoming more and more wrapped up in a clique of three who, as new transfers to the school, are proving to be trouble. But at least Dameon loves her, doesn't he?

Kian- a dangerous love interest she did not ask for.
Powers- belonging to an underworld she never knew existed.
A Clique- that could be friends or foes?

A Soul Purpose
The underworld of angels and demons have one thing on their mind: Earth.
Demons want to do what they want.
Angels want to protect humans from these rogue angels, AKA: Demons
For Allison Maney, everything is not exactly what it seems…

A Suspenseful Romance
Caught between Dameon and Kian, the suicide and the clique of three,
Ali won't know who to trust…or who to love.

Let me start by saying that I received this ebook many years ago and left it with others in an email folder. I just recently figured out how to open the attachments of seemingly lost pdf's that wouldn't open because they were years old and am going to read and review all the books that I kept in that folder so some things may have changed or updated from the copy that I have, including the covers.

I don't usually read YA but this wasn't all bad. I've only read one other book by this author so I wasn't sure what to expect with this book.

This book starts right off with a suicide. Tommy jumps off the school roof leaving many in shock. The whole class of kids witness Tommy jumping off the roof, not something I'd want to see. Allison is sure that something just isn't right about Tommy's suicide so she convinces her friends to help her investigate. They do something that could get them in big trouble but find some interesting things out about Tommy, like he was very interested in Angels.

They're all in high school but this seemed a bit elaborate for high school kids to be doing, at least until they start talking to one another and we realize they really are just kids. The way they talk to each other made my head hurt at times. This is part of the reason I don't read YA, I just can't relate at all. Allison's brother is investigating the suicide. He's a cop and wants to keep his sister safe from whatever weirdness might be happening.

Ali and her friends meet 3 new teens who are transferring to their school soon and who entire meeting was just strange. Kian and his 2 friends are weird right from the start. I had a feeling that there was more to them than they were letting on and I was right.

In walks Dameon with his good looks and starts to pay attention to Allison. She's had a crush on him for a while but as soon as he starts paying attention to her, the new guy Kian starts acting jealous and protective. They acted strange towards one another.

I was actually getting a little bored with this book until the paranormal element comes crashing through the story and peaked my interest enough to keep reading. It might have been a little slow in the beginning but the rest of the book kept me engaged in what would happen next.

I did find a few editing errors with this story including the janitor's name being switched from Alberto to Antonio as well as a few other mistakes but it didn't make the overall story any less enjoyable.

I'm glad that I read this even though it's not my usual type of read, it was quite enjoyable.