Back in 2016 right after we had gotten Falcor, some women from the local meth apartment across from us knocked on my door and asked Ken if she could borrow our dog. She said she dropped a cup of noodles on the floor and wanted to know if Falcor could come clean it up for her. He said no. People are nuts.

On May 20th, 2014
I heard this coming from loud speakers out front.

"This is the Metro Police Department, please return to your homes we are in pursuit of a suspect." They also warned the have K9s and they will bite. I look out my window and see people standing around not leaving and the police are yelling at people that they are letting the K9 off the leash to find someone and that they have to go back in their apartments or they might get bit. Police chopper was circling above. 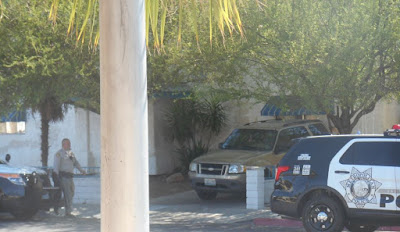 I saw people standing around outside and while I was looking out my apartment window a police officer told me to go back inside and shut my window. I'm inside my bedroom and he's mad I'm looking outside. Wth?

This week on Wednesday morning, I go to take Falcor for a walk and get stopped outside by a police detective. He was asking about one of my neighbors, if I knew who lived there and what they looked like. A little while later several more police officers showed up and they questioned everyone who came outside and even searched one lady's car. They milled around outside for about an hour and then they all left. At first we thought maybe someone had died in that apartment but no, nothing like that. The about an hour later we see the lady that lives there come out of another apartment where she had been hiding from the police. lol My neighbors are nuts. There's always something going on around here.

Oh and I have a new neighbor!
😢

My apartment manager told us when the apartment next door to us went vacant that she would be moving in quiet 'normal' people in this courtyard. Well, she moved in someone and right away this guy and his girlfriend started fighting really loudly. I've now seen them both over at the neighborhood meth apartment buying what I assume are drugs. Everyone just does it out in the open like they don't give two shits if you see them. My neighbors are up all night and all day banging on the walls, and yelling and screaming in their apartment. I got a good look at him today and realized....get ready for this....it's the apartment manager's son!

He, his girlfriend and their toddler had been living in the managers apartment but now they're living next door to me. Oh joy. They've been in that apartment for a week and they've had a big screaming fight every single day. This should be interesting.