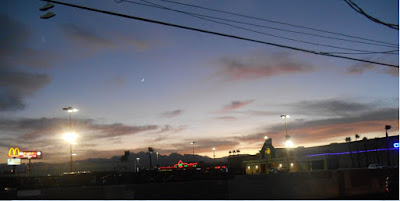 This week has been fairly quiet around here so I thought I would share something different. I took this picture of the strip mall from the side walk in my courtyard. I'm standing on the sidewalk right before the alley to my apartment complex.

When Cal Ranch moved into the strip mall there were already the parking lot lights in the parking lot because there used to be a Smith's grocery store where Cal Ranch is. Now I want you to look at the two really bright lights on the light poles in that parking lot. Those bright lights that are about half way down the poles were not there until Cal Ranch moved in. They said that it's for parking lot security but I can tell you that these brighter than hell lights are not even pointed at the parking lot. No, they are pointed directly at my apartment complex. I took the picture right as the sun was going down and the lights had just come on, they look bright but as it gets darker out they get brighter, it takes them a little while to get to their full brightness. And I'm not gonna lie, it's bright as hell! The people who live in the apartment with their bedrooms facing the alley asked for blackout drapes from the apartment manager because the light was so bright it came right through the regular curtains and mini blinds. It lights up my whole courtyard from way the hell over there so you know it's bright as hell coming in those bedroom windows.

I think it's rude as hell to have two bright as hell lights pointing at an apartment complex and then try to say that the lights are for parking lot safety. There are 4 lights above the bright ones and those are the lights that light up the parking lot. Just say it is what it is...They know how bad the neighborhood is and wanted extra security lights,  lighting up this area. I'm just surprised they got away with those bright lights pointing over here like that. It's obnoxious as hell.