Review: BEARly Mated To The Grizzly by Jenika Snow 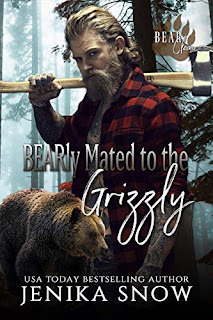 I’d once been a great dancer. A ballerina. But an injury ended my career, had me longing to go back in time, had me loathing the city and the very profession I’d once loved.

So, I decided to get away from it all, go out in the middle of nowhere to clear my head, and focus on what was important.

Things were going great until a bear was at my back door, trying to get in. And it ended with me wielding a knife for protection and realizing it wasn’t just any bear, but a shifter who claimed to be my mate.

Maddix. Strong and powerful, his very presence had me questioning my entire existence. The mating was fast and furious, potent and real. It was everything I ever wanted, and everything I never thought I’d have.

It was all wrapped in one whirlwind, insta-lust experience.

But could I give myself over fully to Maddix? Could I truly leave the city and the life I’d always known behind?

Could I do it all for the promise of love from one possessive, territorial bear shifter who would do anything to make me happy?

Because if there was one thing Maddix made very clear, it was now that he had found me, he wasn’t letting me go.

This is the second book in the Bear Clan trilogy. I liked the first book so much I went and bought the other two books too. In this book we have Maddix who is feeling like he is about to lose his mind because all he wants is to find his mate. He's a bear shifter who lives close to his brothers but far enough away that they have space.

Allison had been a ballerina but one wrong landing had broken her ankle and ended her career. She ended up being a ballet teacher but it just wasn't the same so one day she packed up and went to get some rest in a cabin she rented out in the mountains.

Maddix was running around the mountains in his bear form when he caught her scent and his human half couldn't stop the bear from seeking her out. She saw him alright and was terrified that the bear was trying to get inside her cabin to attack her. Their first meeting was not ideal but when she finally realizes what he is she does finally calm down. Then of course the attraction takes hold for both of them, they are smokin' hot together. They could hardly keep their hands off each other almost right from the very start.

Humans and shifters coexist peacefully, humans being taught about shifters in school so they know what to expect if they happen to be mated to one. But even though she knows what to expect, it doesn't make it any less confusing or exciting.

This was a quick, sexy novella that kept me fully engaged because I wanted to see them get to know each other and see Maddix find his mate. This trilogy has been great so far and I'm looking forward to the next book.