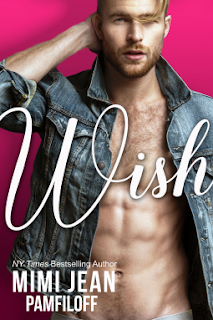 My ex was a con artist who left my life in shambles. But am I going to let that break me? No.

I’ve got a plan. It’s a long shot, but with some hard work, I’ll pull my life back together.

Only, just as I’m in the thick of it, I find an unusual bottle with a note inside: “You get one wish. Make it count.”

And nothing could prepare me for the screamin’ hot man with piercing blue eyes who shows up at my door. He says the note is his and he wants to give me true happiness. Money is no object. A wish granted from a billionaire.

I should slam the door in his sex-god face, because this guy has trouble written all over him. But the more time I spend with the demanding, arrogant man, the deeper I get into a twisted history that pulls at my heart.

Ginnie makes art pieces from broken glass. She needs to make these pieces and hope that they sell because her ex took off with her money and left her with a mortgage that she can't afford.

Marus/Mr. Wish goes around granting wishes to people who find the glass bottles that he secretly puts around town.

Ginnie finds a glass bottle at a garage sale but some guy takes it from her and walks off with it. Later she finds the same bottle at a thrift store and takes it home with her. Inside the bottle is a piece of paper that says it will grant her one wish. But she thinks it's just some kind of joke until a guy knocks on her door and asks why she hasn't made her wish yet. Mr. Wish is at first a grumpy, kinda stalkerish guy that I have to say I really didn't like. He was a little pushy and showed up out of the blue and kept after Ginnie to make a wish when he knew she thought he was some weirdo.

What happens next was stunning and heartbreaking. Marus/Mason/Mr. Wish has a very complex background and as the secrets slowly unwound around him, I had so many emotions about him but in the end he really did redeem himself, it just took a while.

This story had my emotions all over the place but I stayed up until after midnight reading it because I could not put it down. I needed to see if things worked out and what would happen next. At one point I was shocked and felt so bad for Ginnie, but it's a good thing she's such a tough character because she really needed to be for a while.

This is the first book that I've read from this author but it won't be the last.

If you had one wish, what would you wish for?

Disclosure: I was given an ARC of this book via NetGalley but all thought and opinions are my own.