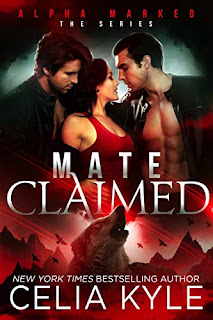 As if hitting thirty wasn’t enough, unmated Scarlet Wickham is summoned to this year’s Gathering. As a woman Marked to be the mate of an Alpha pair, she’s not going to find happiness anywhere other than in the arms of two Alpha werewolves. So, off she goes with her sisters in tow. ‘Cause yeah, she’s one of the plump Wickham triplets, and they’re all being carted off to werewolf speed dating.

Keller and Madden, Ruling Alpha pair, can’t believe their luck. They’ve found their mate, and she’s more than they could have ever hoped for. She’s feisty with spirit to spare, and lush curves that they want to trace with their tongues. They can’t wait to solidify their bond and get to know the beautiful woman who is to rule at their side. But first, there’s the minor inconvenience of a challenge to the death…

Scarlet and her sisters are all summoned to the gathering where werewolves sniff the chosen females who are born with the marks to show they are werewolf mates. Only problem is only two of the sister actually have the mark so why is the third sister summoned? They're anxious, angry and a little scared because who knew what their mates would turn out to be like. At the gathering the werewolves sniff the females to see if they're mates and they seem to know right away if they are. Scarlet seems to know fairly early that Keller and Madden are her mates because her mark tingles when she's near them.

The only problem is another pair of werewolves seems to think that Scarlet is their mate and they challenge Madden and Keller to a fight to the death to claim her. This novella is packed with information, action, romance and plenty of smexy time.

I already love this author so it's no surprise that I loved this first book in the series and now I want to go read more from this series because it definitely stated out fun. I'm looking forward to seeing what happens to the other two sisters and who their mates end up being.