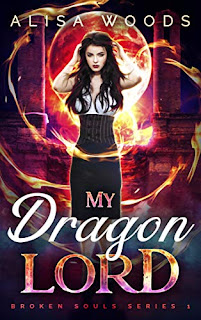 She’s stumbled into a lair of desperate dragons—and she’s just the thing they need.

I really messed this up.
Pinned to the floor by a billionaire playboy, caught stealing files from his computer.
“I’m trying to decide whether to kiss you or lock you up,” he says.
“Kiss me, and there will be blood. Not mine, either.”
He just smiles. Rich, powerful, probably used to getting anything he wants.

I’m just here to find my sister—I suspect he and his band of playboys have trafficked her and who knows how many others. I’m here for them too. Eventually.

But now I’m shackled to the wall in his dungeon—a literal dungeon in a literal castle tucked in one of the Thousand Islands at the border of Canada.

I really messed this up.

Ember’s a hot-shot reporter. Niko’s the sexy Lord of the Lair determined to find his soul mate… and he’ll do whatever it takes to save his people from extinction.

My Dragon Lord is a steamy dragon shifter romance that’ll heat up the sheets with love and warm your heart with dragonfire.

Nikolais Lord had a party and Ember makes her way into the party to find her sister. But she's a reporter and finds her way to an office where she's caught trying to steal files from his computer. She has no idea that the men at the party are actually dragons who are looking for their mates.

Ember thinks she can get in, steal some files, look for her sister and get out. But when Nikolais sends her to the dungeon instead of calling the police, she doesn't know what to think. But once he comes back and explains everything to her, she calms down and talks to him.

She's a reporter so what she wants to do most is an article about dragons living among the humans looking for their mates. But he explains to her that if they let it be know that dragons live there among them, the Vardigah which are dark elves, would come and kill them all. They already had them try to kill them all off and they almost succeeded so letting humans know about them was out of the question and she understood why.

Ember and her sister bot have the mark to show that they are a mate to a dragon but in order to find her mate she would have to kiss the dragons until they found each other. But there was already a strong pull between these two so I already knew that they belonged together.

When they find out where Ember's sister is and who has her they make plans to go save her. I really liked this book but it did end on a bit of a cliffhanger. I would have liked to have seen what's going on with Ember's sister after she's rescued but we don't get that. It was nice that Ember and Nikolais have a conclusion to their story and I am sure that Cinder will get her story in the next book so I'm not too mad about not getting a complete closure of Cinder's story since she'll be in the next book.