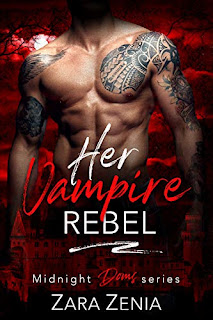 Book Description
I'M KEEPING HER.
The sweet psychology student with a troubled past.
Her ex is stalking her, but I won't let him hurt her again.
I'll finish him if he even tries.
Because I love the way she submits.
Her sweet soft yes, sirs. The way she gives herself over to me.
I should let her go--she has her whole life ahead of her.
But I can't. I'm buying her a collar and making her mine.
Mine alone
My Review
Carolyn got out of a bad, abusive relationship with a guy who used BDSM in a way that it shouldn't be used. He was abusive and used that as his way to hurt her. She's been free of him for four years but he keeps tracking her down when she moves to a new place and she's scared he might find her again.
James, a vampire has been trying to stay two steps ahead of one of his old nest-mates who wants him dead for killing their sire. He wants to stay in this city but he has to get the approval of Lucius, the King but he's out of town for a while. So he appeals to those left in charge and settles in, taking in Club Toxic where vampires go to find willing submissives and blood donors.
When Carloyn agrees to go to Club Toxic with her best friend, she not sure about playing in the dungeon but finds a nice Dom and they play a little in the dungeon. It's been years since she felt comfortable enough to play like this because of her ex, but James made her feel comfortable. They hit it off right away and even make plans to see each other again afterwards. James feels possessive of her even after the first time they are together but wants to take things slow for her. So when her abusive ex starts sending her threatening texts and voicemails, he wants to help keep her safe.
When the danger from her ex gets worse, she worries that he might hurt James. But James is a vampire and can take care of himself. But when someone from James past makes himself known, that's when things get really dangerous and James has to make some tough choices.
I loved this book, it had the right amount of danger, romance and BDSM in it to make it really fun. I am having such a good time reading this series.
I give this book 5 out of 5 stars.
Posted by Mary Kirkland at 12:00 AM