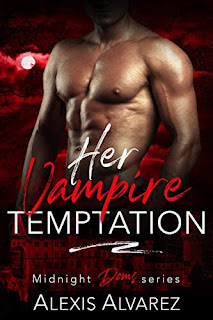 Book Description
SHE’LL LEARN TO CALL ME MASTER.
The redheaded mortal is intoxicating – young, smart, beautiful.
I took her to the dungeon and delivered a lesson in pleasure. And a little pain, to make her blood sweeter.
Then I wiped her mind and sent her home. Because immortals and mortals don’t mix.
But now three young women matching her description are missing, and the vampire I sired is up to no good. He's hunting my little mortal. I have to keep her close to me. Protect her.
While she’s here, she’ll learn to obey and call me Master…and she’ll love every second of it.
The only problem? So will I.
When this is all over, I won’t want to let her go…
My Review
Bri has Xeroderma and she can't go out in the sun. UV light makes her skin blister and bleed. For work she is a web designer and makes her own hours at night.
Alain is a vampire and likes to go to Club Toxic to play and find submissives he can get a little blood from. Unfortunately one of the vampires he sired, Karl is killing humans for fun and he has to put a stop to it.
Bri has car trouble and is pulled to the side of the road putting coolant in her car when they first meet. He comes up behind her to let her know that she's on private property and needs to leave. What happens next was nothing short of a steamy, snarky, sexy encounter. The banter between these two would have had me hooked if I wasn't already so far down the rabbit hole with this series, that I already knew I would be reading the rest of the books left in this series. These two were fun and sexy right from the start and I love a snarky heroine. Love it!
To both of their surprise, they both end up at Club Toxic on the same night and Alain is shocked and delighted to see her there since he couldn't stop thinking about her. Club Toxic is owned by the vampire king and is a BDSM club for vampires but humans go there too. They end up playing in the dungeon together. The vampires usually wipe any memories of blood sucking or vampires before the women leave but her mind isn't easily wiped and he's sure that if he tries any harder, he'll leave her with brain damage, so she leaves with a few memories.
There's a stalker that's been taking women that look like Bri and none of their bodies have been found. So when Alain finds this out, he wants to keep Bri safe because he knows who it is and he doesn't trust the man. Bri doesn't like being cooped up while Alain is trying to keep her safe and she does a few things that put her in danger. For a smart woman she takes some chances that I just thought were dumb but Alain and his friends help when they are needed.
I really liked the romance between these two and I enjoyed the mystery surrounding the missing girls, how they were picked and why they were being taken. I am really enjoying this series.
I give this book 4 out of 5 stars.
Posted by Mary Kirkland at 12:00 AM