Review: His Captive Mortal by Renee Rose and Lee Savino 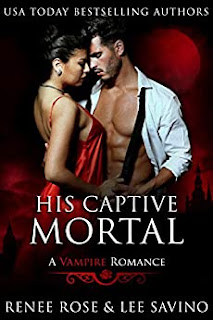 Book Description
THE SWEET LITTLE MORTAL IS MY CAPTIVE NOW...
For centuries, I've suffered under a curse, and searched tirelessly for the woman who can break it. Now I've found her in a dark alley, walking home at night.
She tries to fight, but there's no escape. She's my prisoner. I'll keep her until she figures out how to free me.
She's feisty, but I'm in charge now. She'll learn to bow to her vampire master and obey my will. Once the curse is gone, I'll let her go.
But then she gives herself fully to me. Her submission and surrender. She's sweetness, love and light.
You made a mistake, little mortal. I've tasted your forbidden fruit--you gave it to me freely.
And now I want forever...
My Review
Aurelia is walking home one night and runs into Charlie. When she throws out a bubble of light around her to protect herself, he knows that she's the one he's been looking for.
Charlie needs someone like Aurelia to break his curse. She doesn't realize that she has powerful magic so he has to teach her how to use it before she can help him break his curse.
More than 100 years ago a powerful witch put a curse on Charlie because he wanted to leave her. Anka was also his mistress but she slept around with other men and he got mad about it and didn't want to put up with it anymore. And even though he was a vampire, she was still able to put a powerful curse on him that's lasted a very long time.
Aurelia realizes some things as she's reading the books about magic that Charlie bought for her to study and tries several times to rid him of the curse only to come up short. But once she tries the one thing she wasn't sure would work, it does and she is able to finally rid him of the curse. But when Charlie realizes the truth, he's not sure he can get past it even though the curse is gone. It takes a little time for them to finally realize that they love each other and come back together but I really liked the little twist that was thrown in there even though I totally saw it coming.
I give this book 4 out of 5 stars.
Posted by Mary Kirkland at 12:00 AM