While I was out walking Falcor I spotted this window had been smashed and punched. This is my elderly neighbor who a few weeks ago had a broken cheekbone from his homeless brother. He told me his brother came by and broke out his windows after the police found him and served him with a restraining order. I haven't seen the homeless brother around here for a while but he came by to do this apparently. On the right side there's just a few jagged pieces left of the window and on the left side there's a hole punched in the window.
---- 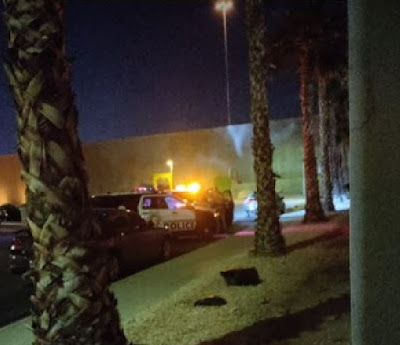 There were 3 police cars parked outside the office courtyard when I came out to walk Falcor and then they moved down the street to this point. I have no idea why they were here. 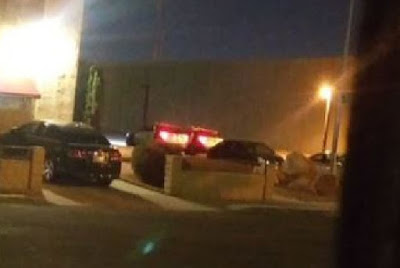 And then about 30 minutes later when I went to go to bed, I looked out the window and 2 of the police cars were down the street a little ways. They stayed down there at least 30 more minutes. I thought maybe they were planing something more but no, they left later on. I guess they just had a lot of talk about.
So that's it for this week's Apartment Hell  Life! Be sure to come back next week for more.
Posted by Mary Kirkland at 12:00 AM