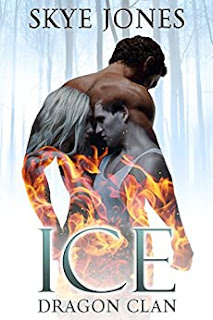 Book Description
When a tough, ice-cool cage fighter meets her match in two hot as sin dragon shifters, the sparks fly.
Ice is a tough cage fighter who has spent her life closed off and mostly alone. As a child, she experienced moments where she burned others with a mere touch. These strange experiences terrified and confused her, but she knows if she keeps her emotions under control the burning doesn't happen. This iron self-control has made her a fearsome opponent in the ring.
When two sexy as sin strangers enter her life, telling her they can shed light on her mysterious 'gift', her world is turned upside down.
Nathan, leader of the Scottish Dragon clan, is shocked to find Ice, a dragon female, living in the human world. Not only is she unaware of her heritage, she is also a match made in heaven for Nate and his bonded male, Dom.
When Nathan calls him to the city to meet their mate, Dominic is immediately smitten. As Ice spends time with the two males, it becomes clear they all share a mutual desire but are too scared to act on their feelings.
Can their heady, lust-filled nights lead to a lasting commitment and happiness for all three?
Ice can be read as a stand alone. It is a MMF, shifter menage novel. HEA guaranteed.
**This book is a re-release of a book first released as part of the Flight of Dragons boxset with added scenes and chapters**
My Review
Ice is a female MMA fighter, but she has to be very careful about fighting and getting mad because she can burn people with her magic gifts that she isn't sure how she got. She was adopted when she was little and never knew she was a dragon shifter but is a latent, meaning she can't shift into a dragon form. So when Nathan spots her while she's fighting and then later 'smells' her and can tell just by her scent that she would be a match as a mate for he and Dom, he's not sure what to do.
Dom and Nathan end up finding her at a bar and asking her to come back to their place where they explain to her what they are and how she could be their mate. She feels excitement at finally figuring out why she has the power she has and wants to get to know her people more. So while Dom and Nathan are giving her space to get to know them better and letting her make up her own mind as to whether she wants to have a life with them, she gets to know her people and the culture better.
Dom and Nathan are bonded males and even though they now both want a relationship with each other, they haven't acted on it until they bring Ice into their lives. Things seem to be going really well until Ice is kidnapped and we find out who she really is. I liked most of this book and think this book sets up the series really well. I can't wait to read more.
I give this book 4 out of 5 stars.
Posted by Mary Kirkland at 12:00 AM