Book Review: A Mate For The Dragon by Zoe Chant 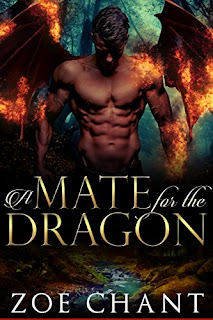 Book Description
A curvy woman with a broken heart + a hot dragon shifter with a haunted past + a deadly clan of evil dragons = one sizzling and suspenseful romance!
Dumped by her boyfriend and out of a job, curvy Holly Edwards just wants to forget about her troubles for a while. A peaceful vacation in a cabin in the woods seems like the perfect way to get some alone time and mend her broken heart. She thinks she can do without love in her life - at least until the drop-dead gorgeous Stefan walks into her life.
Dragon shifter Stefan Novak is the last of his clan - and unless he finds a mate soon, his lineage will die with him. But Stefan knows that even if he finds his mate, she too will be in deadly peril from the rival dragon clan who is hunting him. He's made up his mind he won't seek out his mate, even if it means he'll be alone forever - but he doesn't expect his mate to come looking for him.
The connection between Holly and Stefan can’t be denied, but old foes resurface, threatening to pull them apart. Can they survive the battle between rival dragon clans? Stefan's enemies will stop at nothing to defeat him - even if it means threatening Holly's life. Can he keep her safe and win her heart?
A Mate for the Dragon is an action-packed standalone paranormal romance. No cliffhangers!
My Review
Stefan has been in hiding from a ruthless dragon shifter who killed the rest of his clan, he's the only one left. He wasn't looking for his mate because he knows getting close to someone will put them in danger but he can't walk away once he finds Holly.
Holly has lost everything in a short amount of time. Her boyfriend left her, and she quit her job because she thought she was going to be with the guy who left her behind.
Holly decides to rent a cabin in the woods to try and relax and regroup after her life changes. But she meets Stefan out in the woods when she hurts her ankle and he helps her back to her cabin. He even stays with her and gets her some ice for her foot but she isn't used to someone being this nice to her and isn't sure what to make of it. So when Stefan shows her that he might be interested, she jumps at the chance to lose herself in this gorgeous man even if it's only for one night. But Stefan can't say goodbye to her once he starts to get to know her and they form a bit of a bond since they are mates and he doesn't want to leave but staying could put her in danger.
Once the crazy dragon shifter finds them and puts both Holly and Stefan in danger, all hell breaks loose but secrets are reveled and so are the motives to the family feud that has been going on for years.
I really liked the ending and will be reading more of this series.
I give this book 4 out of 5 stars.
Posted by Mary Kirkland at 12:00 AM