This is a weekly blog post that I'm calling Apartment Hell  Life. I've mentioned a few times some of the crazy things that go on in and around my apartment complex in the past 24 years that we've lived here and people keep telling me I should write a book. But instead of a book, I've decided to share the crazy things that have happened in and around my apartment complex in the last 24 years here in a weekly blog post.
---
In the ongoing License Plate Thief Chronicles... Another neighbor told my daughter that she was approached by the thief and another woman who were selling stolen license plates in the strip mall parking lot next door and wanted to know if she wanted to buy one. O.o What? Yeah. I could hardly believe it either. 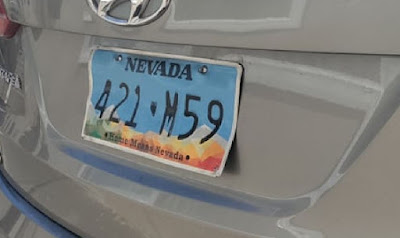 Then the next morning my daughter spotted the thief's car with a *new* license plate. But I don't know if you can tell from this picture, the plate is all bent to hell. LOL She sure as heck didn't get this plate from the DMV. First off they give you 2 license plates and they are not bent all to hell looking like they've been through a trash compactor. Then the next morning I realized that the license plate was gone again. She only puts the license plate on her car when she's driving it. Otherwise she takes the plate off and leave her car backed into her spot in the alley. Not strange at all.
She probably knows that the police have been driving up and down our street and the alley and she doesn't one of them running her plate. I mean, it's just so obvious and she'll get caught eventually. Plus as you can see, there's no registration sticker on this license plate. She'll get caught...again. What an idiot.
Maybe I shouldn't have posted the plate number but I don't care. It's not like it's her actual plate. It's so obvious it's stolen.
--- 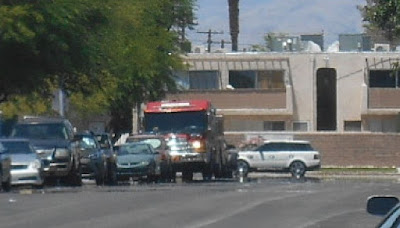 I spotted the fire truck at the end of my street this week. Not sure what was going on but no police or ambulance showed up and they left a little while later.
---
I did see the police in front of my apartment building at 5am one day but my stupid phone wouldn't take a picture because it said the SD card was full and by the time I got my camera, the police were already gone. So that's why there's no picture.
----
The high this week was 101F/38C
So that's it for this week's Apartment Hell  Life! Be sure to come back next week for more.
Posted by Mary Kirkland at 12:00 AM