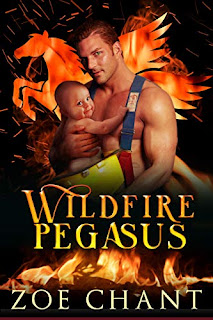 Book Description
The baby isn’t the biggest secret…
Diana never even knew his name. One impulsive, out-of-character night with a smoking hot firefighter, and now she’s a struggling single mom. She may have had to give up her dreams, but she’s determined to give her precious baby Beth everything...including a chance to know her biological father.
When a twist of fate lets Diana track the firefighter down at last, she’s braced for him to run screaming—not sweep her into his arms and hold her like he’ll never let go. Yet she can’t escape a nagging feeling that it’s all too good to be true. Is it just her anxiety disorder…or something more?
1. Rescue mate
2. Claim mate
3. Catch newfound daughter (who turns into an adorable, alarmingly fast pegasus) yet again
…were not on Callum’s to-do list for the day. Now he’s flying blind without a plan, and only one thing is certain. Diana and Beth are his, and he’ll do anything to keep them.
Even if that means hiding the truth.
It’s not just that he’s a pegasus shifter (though that’s hard enough to explain). How could Diana trust him to be a good father if she knew about the crippling curse of his special power? Or the hidden pain in his past? And as if his personal demons weren’t enough, there’s the literal demons stalking his fire crew...if Diana knew any of it, she’d bolt even faster than little Beth.
Especially if she discovered the biggest secret of all…
He might not be Beth’s father.
My Review
Diana had a one night stand with a man she didn't know and had no way to get a hold of once she found out she was pregnant until she spots him giving an interview on tv. After finding out where he is, she drives to him to let him know about their baby.
Callum is a pegasus shifter and Hotshot firefighter. He's also an identical triplet so when Diana finds him and tells him they have a baby together, he's not sure he's the father but he knows Diana is his mate.
Because of a set of crazy circumstances, Callum doesn't remember a night he might have spent with Diana but that doesn't stop him from claiming the baby as his own and claiming Diana as his mate even though one of his brothers could be the father. Hearing about how she met Callum and maybe his brothers was actually really funny.
The evil from the last few books in this series is still after the Hotshot crew and they are still trying to communicate with the thunderbird. But we do get a little more information about the thunderbird so I'm looking forward to seeing where that leads.
Callum and his two other brothers haven't always gotten along but there's been a lot of miscommunication along the way so when they all come together to figure out who the father is, it's a real mess at first. Once again if they had just talked, things could have been resolved so much easier. Diana takes all the information that gets thrown her way pretty well considering it's quite a bit. But Callum and Diana were so great to watch together.
The evil is still after the team so we get to see Lupa again who seems to be in charge, kinda and her flying hellhounds. Fenrir, who is one of the Hotshot teammates but who is stuck in his animal form is a hellhound so it was really interesting to see how he reacted to Lupa when he got a good look at her. Fenrir's book is next and it's the one I've been looking forward to the most because he's such an interesting character.
This book was so much fun and so many secrets came out in this book, so I'm really glad I read it. This series is best read in order because of the overarching storyline.  This series has been so much fun that I've been binge reading the books.
I give this book 5 out of 5 stars.
Posted by Mary Kirkland at 12:00 AM