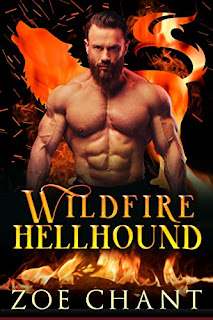 Book Description
He knows he's always been a wolf.
He's wrong.
His past is gone, dead and buried.
It isn't.
And nothing, nothing, is more important than pack.
Until he meets her.
This is Fenrir's story.
My Review
Fenrir is a hellhound shifter but he's been stuck in his animal form for a long time. His Hotshot firefighter team doesn't know his entire story because he doesn't remember it all. There's something between he and Lupa and when he comes face to face with her, he lets her escape and then he runs off and his team can't find him.
Darcy is a private investigator and while out on an assignment she finds a naked, unconscious man. She brings him back to her place and warms him up but he speaks very strangely and then a strange woman knocks on her door asking about him. He asks Darcy to call his firefighter team right before he passes out and by the time they get there, he's turned back into his animal.
It takes Darcy a few minutes to realize that the very large wolf and the man are the same person after his team gets to her house. It's not until Fenrir shifts into his hellhound form that Darcy accepts what she's being told. The fact that Fenrir knows Darcy is his mate just makes things more interesting.
Fenrir and the rest of the team try to track down Lupa and her gang and find her but she gets away. Fenrir wants to serum that Lupa uses to make him human again but they can't figure out how to make it for him and he can't figure out how to shift from his animal back to human on his own. And because of this he can't mate with Darcy which really depresses him.
Darcy and his team try to figure out his connection to Lupa, why he was stuck in his animal form for so long and why he can't remember what happened to him when he was still human. It was a great story full of twists and family secrets. The romance between Darcy and Fenrir was heartbreaking because they knew they had an uphill climb to be together but it was still really great to watch it happen.
I liked finding out more about the evil that's been tracking them and trying to attack them and why. We find out a lot in this story so this series is best read in order since the overarching storyline would be confusing otherwise.
I give this book 5 out of 5 stars.
Posted by Mary Kirkland at 12:00 AM