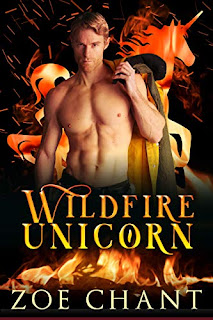 Book Review
There's a shirtless firefighter at her door...and he's holding a baby unicorn.
Animal rescue officer Candice thought she’d seen it all. That was before the unicorn.
Or rather, unicorns.
When a smoking hot firefighter turns up at her emergency centre, the baby unicorn in his arms turns out to be the least unusual thing about him. And he wants Candice for more than her fully-equipped rescue trailer…
Unicorn shifter Wystan thought meeting his true mate would solve all his problems. Now he’s got an adorable and unruly mystery on his hands, the mother of all wildfires breathing down his neck, and dark forces closing in on all sides. How’s he supposed to romance this blunt, prickly, astonishing woman in all this? Especially when Candice guards her heart as fiercely as she protects the animals under her care?
But when unicorns are real, dreams can come true…
And so can nightmares.
My Review
Wystan is a unicorn shifter and at the end of the last book, he and his team find a baby unicorn in the bushes as they are fighting a huge fire. Unicorn shifters were supposed to be able to heal but Wystan didn't have that ability and he felt like a failure. So he did the only thing he could do in this circumstance, he brought the tiny unicorn to the nearest veterinarian.
When we first meet Candice she's trying to help a rat that was left behind by its owner. I love rats so of course I already loved her. Candice is the senior animal control officer and she has tents set up at the camp for the firefighters to bring in the injured animals they found while fighting the fires.
When Candice sees the baby unicorn for the first time she thinks it's an albino baby deer so there's no big drama around that. But then a powerful force that they've decided to call, nightmare follows them all back to camp and wrecks havoc all around them. There's also a powerful shifter that they've tried once in the first book to make contact with,  but they aren't sure if it understands them. If they are going to get out of this alive, the'll have to try and reason with the shifter and help the evil thing that's stalking them.
Candice and Wystan are very much opposites and each has some baggage but Candice is very standoffish because of what happened to her in the past which makes their love story a slow burn romance which I was fine with. They took their time and got to know one another before going further.
There's a huge twist that leads to a really big secret and I liked it and thought it was a cool reveal. A lot happens in a short amount of time at this point and it kept me on the edge of my seat waiting to see what would happen next. I really liked how this ended though and am really looking forward to the next book.
I give this book 5 out of 5 stars.
Posted by Mary Kirkland at 12:00 AM