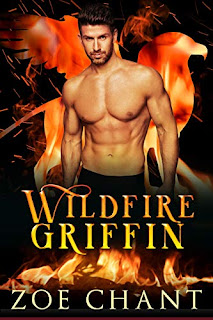 Book Description
He's an alpha griffin shifter. She's autistic. He's met his match...
When firefighter Rory lays eyes on fire watcher Edith, he instantly knows she’s the one. His fated mate.
Now, to win her heart, he just has to protect her from:
1. A raging wildfire (actually, she’s already got that covered, thanks)
2. The lightning-throwing invisible monster that started it (um, the what?)
3. Killer bunnies (don't even ask)
4. The appalling matchmaking attempts from his crew of misfit shifters (not only is this guy scorching hot, his dog is adorable too. And...weirdly smart?)
5. His own animal need to claim her. Now. (if only she could look him in the eye…)
Good thing that as a powerful griffin shifter, he can handle anything…right?
There’s only one problem.
The last thing this autistic woman wants—or needs—is to be protected…
Zoe Chant returns to the hot, hilarious world of the Fire and Rescue Shifters with an all-new series starring an all-new crew - now wilder than ever!
My Review
Edith is in her fire watch tower watching for fires in the forest but when she witnesses a lightning strike out of nowhere and calls in the small fire, they don't believe her but send someone to check it out anyway.
Rory and his firefighter crew were called to check out a wild fire when he comes face to face with Edith and as soon as he meets her eyes, he knows she's his mate.
An invisible monster is lurking in the forest, ready to take over another animals bodies so it can watch the Hotshot team and try to find a way to possess one of them. All the while Rory is trying to get to know Edith a little better and find out why she's so skittish. But after finding out more about her, the team asks her to join their Hotshot team and fight fires with them and after a little persuading, she accepted the new position which was great since Rory wanted nothing more than to get to know her better before letting her know he was a shifter and she was his mate.
But because she didn't tell anyone she's autistic, there's plenty of miscommunication going on that leads to personal problems that could have been cleared up if they had just talked. But in the end things end up the way they are supposed to and we get to see yet another twist when they find another kind of shifter that I have a feeling we haven't seen the last of. This series has an overarching storyline and after reading this book (book 1), I plan on reading the rest in short order.
I give this book 5 out of 5 stars.
Posted by Mary Kirkland at 12:00 AM