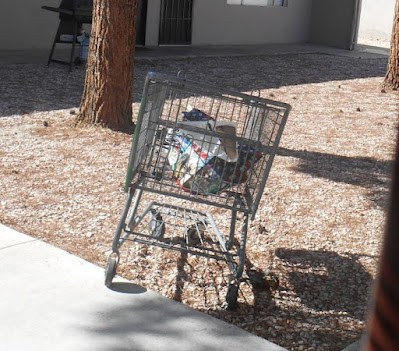 One of the people that went down to drug dealers apartment couldn't trade their cart full of garbage for drugs so instead of taking their cart with them wherever they were going they left it parked right in front of my door. I had to shove it away from my door when I took Falcor out for a walk. The porter pushed it out to the alley when he came through so the guy with the truck who collects all the stray carts could get it. The cart guy then takes the cart back to the stores and get paid for each cart he brings back. So the carts always get picked up from around here.
--- 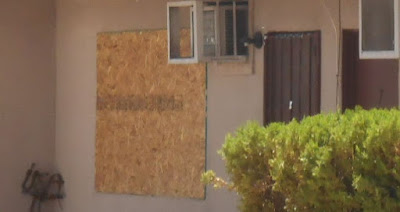 A couple of weeks ago I noticed that the druggies from drug dealers apartment were coming and going from an apartment across from them. The guy that lives there though is very private and doesn't usually talk to anyone. I hadn't seen him for a few days so I thought it was weird. The next day I noticed the maintenance man was changing the locks and nailing plywood over the window  so the druggies couldn't break into the apartment so I thought he just moved out and the druggies had broke into his apartment.
A few days later I noticed a few guys moving the furniture, tools, and other belongings out of his apartment. One of the guys said hi to me so after saying hi I took the opportunity to ask how the guy who lived there was doing. He said his brother got sick and passed away while in the hospital. It surprised me, I gave my condolences and left. So one of my neighbors passed away and the druggies from drug dealers apartment broke in and were using the place as their own for a few days until a family member called the apartment manager and asked them to secure the apartment until they could get here.
----
My daughter's boyfriend took a video of one of the tweakers in his courtyard climbing the fence to get in the pool and scooting the trashcan around. The pool has been closed for a couple of years but the pool guy comes every couple of weeks to maintain it. My daughter said her boyfriend told her that this week when the pool guy came, this woman pushed him out of the way when he unlocked the gate and jumped in the pool fully clothed. The pool guy shook his head, packed up his stuff and left without cleaning the pool. I guess he wasn't dealing with any of that. *laughing*
The high this week was 95F/35C
So that's it for this week's Apartment Hell  Life! Be sure to come back next week for more.
Posted by Mary Kirkland at 12:00 AM