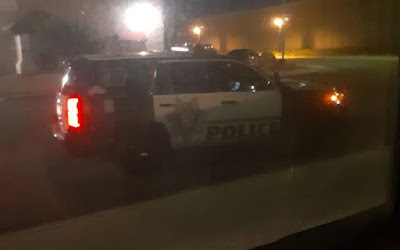 On Halloween night around 11PM, I start to go to sleep and some woman starts crying really loudly across the street. I look outside and see some guy booking it down the street like the hounds of hell are on his tail. I doubt the two people had anything to do with each other, but you never know. I hear crying and yelling and stay awake because I had a feeling the police were going to show up and I was right. Got the picture of the police car and went to sleep. lol I didn't hear anything more and I have my window open at night now because the temps are nice so I would have heard more commotion if there was any.
----- 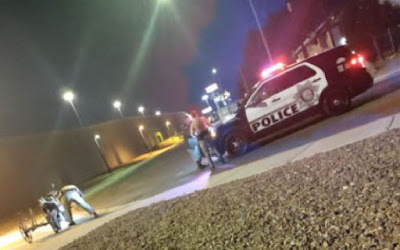 My daughter was at the end of the street playing Pokemon Go and sitting on one of those metal benches that I've shown you. Here's a post with the metal benches and tree's if you haven't seen them before. A guy walked past her on the sidewalk pushing his motor scooter and the police who must have been parked around the corner, pulled up right in front of where she was sitting and stopped the guy. He hadn't done anything but they made him open his backpack and searched it and his motor scooter he was pushing. She heard the police say that they pulled him over because you can't ride a motorized bike on the sidewalk but he never had it turned on, which is why he was pushing it. The the police pulled out a picture of a guy and asked this man if he knew him, my daughter said he told them he didn't.
After a few minutes of searching him, his bike and backpack and running his ID, I guess they didn't find anything and let him go. But I'm stumped, why did they stop him in the first place? My daughter sat there and listened and took a picture for me and even she was trying to figure out why he was stopped. Sure it's a bad neighborhood but the police shouldn't be stopping people for no good reason.
The high this week was 77F/25C
The low this week was 51F/10C
So that's it for this week's Apartment Hell  Life! Be sure to come back next week for more.
Posted by Mary Kirkland at 12:00 AM