Make Your Own Rats Toys 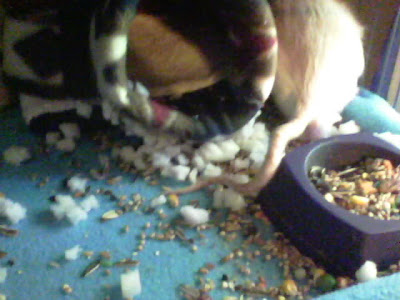 When I first adopted my 4 rats three years ago I bought some fleece houses, hammocks, and beds. They didn't chew the hammocks but the 2 houses I bought had some stuffing in them and as you can see from the picture above they completely shredded it.

I paid $20 for this fleece house so I wasn't all that thrilled that they tore it to shreds. But they seemed to have fun doing it and I left it in the cage for a while, even after the entire bottom half was gone because they shredded it the way they wanted and slept in it. Crazy rats.

But this brings up a really good question. What should you buy for your rat cage and what can you just make yourself.

I found that when I bought cases of soda and put the empty cardboard boxes in their cage with a few holes cut in the sides so they could get in and out, they loved it! They slept in it, played in it and jumped on it until it was flat and I had to take it out. When they were babies I could put cereal boxes in their cage and they still fit in them, they are too big for that now but now all rats get as big as mine have gotten. I have 3lb rats. lol

As you can also see from the picture above I had cheap hard plastic food bowls to put their seed mix in. They love to spread that seed mix all over the cage but you can save money by putting in just enough of the seed mix each day that they will eat.

Also instead of buying chew toys, just boil beef bones and give to your rats. They will love the little bits of meat left on it and the bones themselves with be great for chewing on. Do not give chicken or pork bones...just beef bones.

If you would like to read about other ways to stretch your rat budget, read my article.

Posted by Mary Kirkland at 4:00 AM