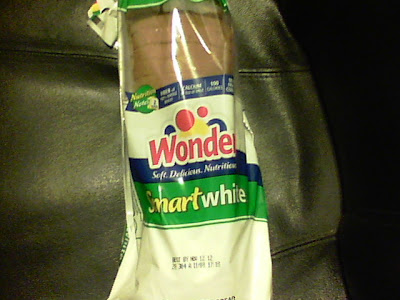 So as many of you now know...the Twinkie has gone the way of the Dinosaur. While I don't mind that so much I do mind my Wonder bread being gone as well. As you can see, I still have one lonely loaf of white Wonder Bread left in my freezer.

After seeing some of the prices for things like Twinkies, Hostess cakes and Wonder Bread on eBay, I'm wondering if I would keep my loaf of Wonder Bread in the freezer and sell it for $500 in about 4 months?

Of course I would think that was a joke if people weren't spending $30 for 6 Twinkies on eBay right now.

Looks like I'll have to start eating a different brand of white bread for my Bologna sandwiches but I'll tell you one thing, it will never be the same as it was when I was a kid. My mom would buy Wonder Bread and cheap bologna and Lays potato chips. My brother and I would make a bologna sandwich with just a little Mayonnaise and then add a few Lays potato chips right in the sandwich. Squish down that Wonder bread and eat it.

I still do this sometimes, but my Wonder Bread is now gone...whatever will I do...
Posted by Mary Kirkland at 4:06 AM