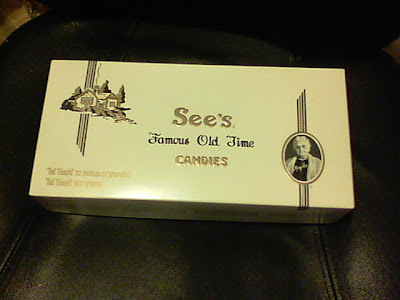 Now this is where I usually tell you how many free samples I received and where I got them from, but this week was a slow week and I didn't receive any free samples. *insert sad face here*

I do have a funny story to tell you.

My brother sent Ken and I a 1lb box of See's candy for Christmas. When the box arrived I called him and thanked him, but he said I was supposed to have gotten a 2lb box, but only a 1lb box arrived. So he called See's candy and let them know he was charged for a 2lb box but they only sent out a 1lb box. They said they would fix the order right away and 2 days later I received another box.

I knew something was different as soon as I opened the box..it was heavier than the first box was. Instead of sending another 1lb box of candy...they sent the original 2lb box they were supposed to have originally sent. So essentially I got a 1lb box of See's candy...for FREE!

*actually my brother got it for free since he paid for it...but it came to me, so it counts as my freebie this week..lol I would have taken a picture of the 1lb box too, but by the time the second box came...the first box was already gone.LOL*
Posted by Mary Kirkland at 12:44 AM