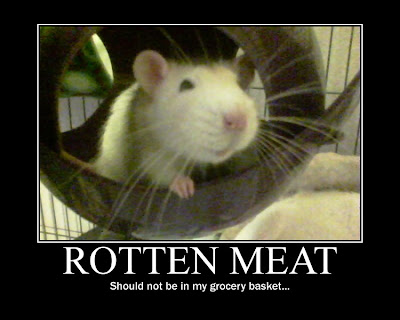 But that's what I've received twice from Vons.com delivery in the past year.

Let me explain.
2 years ago we lost out car when the brakes stopped working and a whole host of other reasons. The car was 15 years old and it did last us a really long time, but it just stopped working and it was going to take a lot of money to fix, money we don't have. So to the scrap yard it went. I'm disabled and don't walk well any longer and Ken is terminally ill and is sick quite often, so walking 4 blocks up to the grocery store especially in the 117 F heat of the summer just isn't going to happen.

So we use delivery from Vons.com a couple of times a month. Most of the time what we get is fresh, in reasonably good shape and nothing is wrong with it. But on 3 occasions over the last year I have had problems with some of the groceries I've gotten from them. Recently 3 packages of the meat I bought turned out to be rotten. I knew right away just by looking at it that something wasn't quite right with a package of the steaks. The edges were all a weird gray color and so I opened the package to see if it smelled and you could have killed a maggot with the rank smell coming from those steaks.

Now I will say, when I called Vons.com to let them know, they issued a refund for that meat right away. So they did take care of my problem. The only problem with that is now I was down 3 days of dinner and in order to order from vons.com you have to spend at least $50 and then there's the delivery fee but if you spend at least $150.00 you get free delivery. So I could either order another large amount or a smaller amount and pay a delivery free which can be anywhere from $6-$12 depending on if you want it same day, one hour window or buy participating products that lower the delivery charge or get it free if you buy enough from them in one order.

Two days later I went in the refrigerator and got out the XLNT Tamales that I had just bought, opened the package and put two in a bowl. That's when I noticed a blue tint to one of them. I thought to myself.."No damn way." So I opened the package back up and took out a couple more and sure enough there was mold on 3 of the XLNT Tamales I had just bought 2 days earlier from Vons.com.

I didn't even bother to call and complain this time, I was just so disgusted I just threw them away.

The very first time I ordered from Vons.com a while back I had my order delivered and checked to see if everything was there. On my receipt there was a large pack of chicken legs that I was charged for, but never got delivered. I called the phone number to complain and they refunded my money right then and there. But that didn't help with the fact that I didn't have the package of chicken legs now.

There have been other things like giving me a substitution of a product when I mark no substitutions and I end up getting a smaller size that costs more than the product I had picked out.

For the most part I think they do a really good job getting the orders filled right and when you have a problem they do give you a refund, but from now on I won't be buying any beef from them. For some reason the beef is usually not fresh, it's brown or just plain rotten. I will buy more bulk frozen packs of meat from them. At least that way I know they won't be rotten and when Ken does go to the store he's going to focus more on the meats and I can get the non-perishables from Vons.com. Maybe that way we won't be getting any more rotten meat.

Posted by Mary Kirkland at 2:30 AM