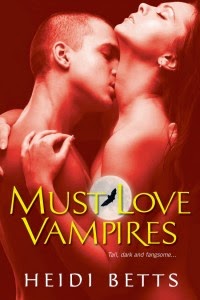 Nightclub dancer Chloe Lamoureaux just met the man of her dreams: Aidan Raines is charming, considerate, rich, and hot. Of course, he’s a little mysterious about his age. And his favorite drink. And he’s not much for sunlight. But he’s asked her to marry him, and she’s ready to do it. Sure, she has a few secrets too—but they’ll have plenty of time to work things out while they’re living happily ever after. Right?

Her identical twin sister, Chuck, isn’t so sure. Maybe reporting for the local Bigfoot-sighting tabloid doesn’t make her an expert, but to Chuck, Aidan and his brother Sebastian look like honest-to-Dracula vampires. Especially Sebastian: beguiling, seductive, and just a hint of dangerous. Maybe she wouldn’t mind him taking a little taste. But with Chloe’s life in the balance, she has to know—do they want hot love or hot blood? Or maybe…a little of both?

This is actually a book with two stories in it. Two brother's Aidan and Sebastian and two sister's Chloe and Charlotte. Both stories Vampnapped and Married With Fangs are in this book.

Charlotte aka Chuck writes for the Sin City Tattler in Las Vegas. While she's used to getting stories about bigfoot, aliens and similar paranormal type things, she thinks she knows what would make a great story...vampires. She loved her job but hoped to get a better job with a more prestigious paper.

Sebastian Raine's is mysterious, private and a vampire. He thinks the woman who is dating his brother has been following him around lately but he doesn't realize it's her twin sister.

When Chuck stands in for her sister in her showgirl act, she gets more than she bargained for and ends up face to face with Sebastian Raine's.

I loved Sebastian's character. He's mystery wrapped in sexy and he's funny. As he's trying to figure things out in his head, the things he says to himself are just hilarious. These two characters really worked well together and I found myself laughing at some of the things they did and said.

Between being a showgirl for a hot Las Vegas club and being a mother to her 4 year old son, life was hard and Chloe was ready to settle down. After some not so great relationships she thought she'd finally found the right guy to spend the rest of her life with.

Aidan was the laid back brother unlike his stern older brother, Sebastian. He was ready to marry the woman of his dreams after only knowing her for a short period of time.

Chloe and Aidan came into this marriage both having not told the other a few secrets about themselves. Some secrets should be told before one gets married in my humble opinion. Just like the other story in this book, the characters in this story worked really well together and I could totally see them ending up together.

I found both stories to be full of humor, sarcasm and wit. I really liked that even though the stories are short, the author packed a lot of information into each one. Enough for the reader to get a real sense of all the characters involved.

I live in Las Vegas so I can't think of a better setting for a rich vampire and his brother to set up house. Plus who wouldn't love a story where two vampire brothers met twins and fell in love at the same time? I know I haven't read that storyline anywhere else before.

If you're looking for a quick Paranormal Romance heavy on the vampires, then this is the one you'll want to pick up.