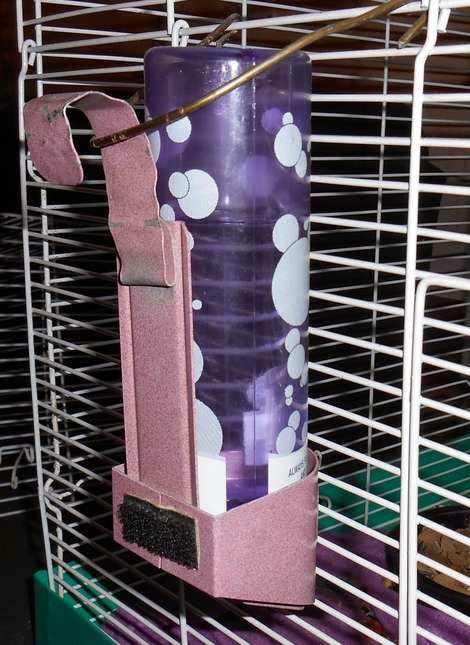 Most people who have rats and hamsters as pets use water bottles but you can use a water dish as well. The differences in using the two different water dispensers is quite big though so if you are thinking of using a water dish, you might want to read this first.

Water Bottles
Using a water bottle that you can hang from inside or outside a cage is probably the easiest way to make sure your rat has a continual fresh source of water. If you use a large water bottle you only have to fill it once a week or when it's almost empty. They are easy to clean, won't leak unless your rat finds a way to chew on it and aren't messy. If you have a rat that likes to chew the bottom on the water bottle through the bars of the cage, you can buy something called a water bottle guard, which is a metal cup that the water bottle sits in and it covers the bottom of the bottle so the rats cannot get their teeth on it.

Water Dish
Using a water dish much like a smaller version of a dog dish and might seem like a good idea but as I can tell you from first hand experience, it's not. When I first got rats I thought letting them drink from a dish like a dog would be better for them and easier. They did almost everything but drink from the dish and it was incredibly hard to keep it clean of debris because they were constantly putting things in the water. I had 4 rats in the cage at the time and put a ceramic dish of water in their cage. They decided it was a bath and jumped in it, rolled and ran through it. Making water spill all over the inside of the cage.

So I tried again and this time with less water. They didn't like that either. Instead of drinking from it they used their mouths to throw food in the water and even picked up their poo and threw that in the water as well. I did find that they liked to lay and play in the water on warmer days to keep cool and they also liked it if I put frozen vegetables in their dish of water so they could 'fish' them out and eat them. So now I only use a water dish as a play toy, to keep them cool if it gets too warm or to let them have fun fishing frozen peas out of the water.

While some rats may like to use a ceramic water dish as their water source, mine did not.
Posted by Mary Kirkland at 12:00 AM