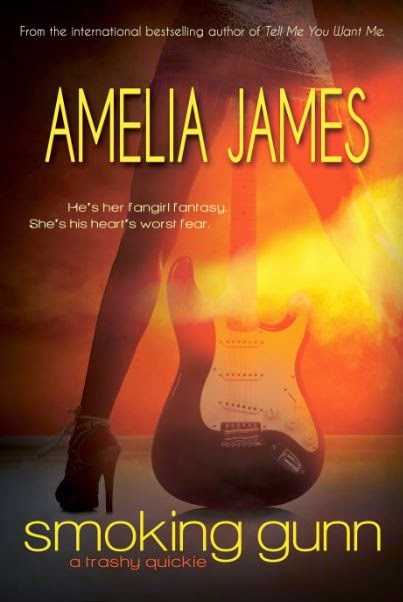 Max Gunn lives a trouble-making, hell raising, rock star life—no good for any woman—and he’s okay with that. He’s been in love before, but never for long, until stripper goddess Blaze grabs ahold of his wayward heart, and he can’t shake it off. Can he do something crazy and have more than a fling with her? Or has he done too much damage already?

“Do I need to spank this guy?” The door swung open and Destiny poked her head in.

I pressed my lips together and waited for Blaze to speak. One wrong word from her and I’d be out on my ass.

Blaze pasted a smile on her lips. “We’re just talking, Des. Thanks.”

Destiny nodded but she stood in the doorway and kept a wary eye on me.

My presence anywhere caused a stir, but I’d never cost anyone money before. “I’m sorry, baby. I had no idea.”

My stomach tied itself in knots knowing that I’d caused her pain already. I never wanted to hurt anyone—especially her—but I always managed to do it somehow. “How can I make it up to you?” Turn around and walk out now.

At least we agreed on something. But the growing urge in my pants refused to leave unsatisfied. “I could, but you still owe me a lap dance.”

“You’re not getting a lap dance.”

“All right, fuck me instead.”

Destiny giggled and Blaze rolled her eyes at the woman. Then she turned on me with fire in her eyes and a dangerous smile on her lips. “Do you know who I am?”

“I’m Blaze. I’m so hot my ex-husband named this club for me, and the judge said I could keep it when he left. I’m the most wanted woman in this whole damn city. I could fuck any guy I want—”
“Any girl too.” Destiny coughed and flashed an innocent smile.

“That’s right.” Blaze lifted her foot and placed her six-inch heel on the bench. “Why should I let you have my in-demand pussy?”

That’s when I understood why my rock star status got me laid. “Because you are every man’s fantasy, and I’d be a fool to let this opportunity slip away from me.”

Blaze cocked her head toward Destiny. “Are you buying this?”

Blaze looked too. “Can’t argue with that.” A tiny spark escaped her eyes before the indifferent mask fell into place. “If she says it’s okay, it’s okay with me.”

Destiny glanced past me with a raised eyebrow, and from the corner of my eye, I caught Blaze giving her a hand signal. Destiny smiled. “I’ll guard the door.”

“Thanks, baby.” I winked and Destiny blew me a kiss. When the door clicked shut behind me, I turned to Blaze and stalked her. “Take off your clothes.”

She backed up a step toward the bathroom, but then pure blazing lust flickered in her eyes, and she stopped and stood her ground in those come-fuck-me shoes. “Oh hell no. You’re in my house. You obey my rules.”

Smoking Gunn by Amelia James will be released on May 25th.
Posted by Mary Kirkland at 11:24 PM