So as most of you know by now, on June 10th I fell into my kitchen wall with my arms outstretched and broke my right arm/shoulder. The exact bone that I broke was the upper humerus bone at the top where it fits into the shoulder socket. 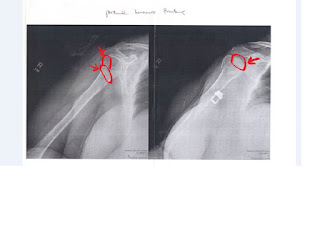 My actual X-Ray showed I had 3 small non displaced fractures in my humerus. I circled the fractures so you can see where they were.

I was on the floor and could not get up. I actually could not move at all because I was in so much pain. I couldn't move my arm or my shoulder at all and every little movement I made caused me excruciating pain. So Ken called 911 and the fire department and ambulance came. Because I couldn't move at all, they gently scooted me onto a large blanket that had handles on all the sides, picked me up and placed me onto the gurney. It was the easiest way to get me on the gurney but it hurt like hell.

I was taken to the ER and had Xrays taken and told that I broken my arm but since it was up near the shoulder that they call that a broken shoulder. But since it was small fractures that weren't displaced that they treat it by putting you in a sling for 4 weeks and start you exercising your arm after 7 days. I'm extremely sensitive to pain medications, they make me sick so I refused any pain meds in the ambulance or at the hospital. The doctor told me that she would give me a strong anti nausea medicine to go with the pain pills and to take that when I got home. Thankfully the anti nausea medicine prevented me from getting sick because I really needed the pain medicine.

The next day when I saw the orthopedic surgeon he told me the same thing and told me what arm exercises to do at home. I was told it could take 6-8 weeks before I would have full range of motion in my arm again. I broke my right arm and I'm right handed so as you can imagine I had a hard time doing a lot of things. Ken was there to help me the whole time. I even had to sleep sitting up on the couch for the first three weeks after the accident because it hurt too much to lay down.

But after 4 weeks the pain medicine was no longer really needed and I wanted to stop taking it. So my doctor told me to slowly go from 4 a day to 3 and so on until I was taking none. I did this over a 4 day period and on the day that I stopped taking any of them I found myself feeling really bad. I called my doctor and he came to see me *I have a house call doctor* and he told me that I was experiencing withdrawals. I was sweating, had anxiety, increased heart rate, headache, nausea, cramping, insomnia, restless legs, irritability, mood swings, and depression. This lasted for 4 days. I've never felt so bad and because I've never had a broken bone before or been on pain meds for more than a few days, I'd never experienced anything like this. But it eventually went away.

When you have your arm in a sling for a long period of time, your muscles weaken, shrink and if you don't start using them a little they will tighten to the point where you can't use them because they are so tight and a doctor might have to surgically repair the tight muscles by cutting them. I didn't want that so even though it hurt like hell, I did the arm exercises and it worked because I can use my arm almost 100% now.
Posted by Mary Kirkland at 12:00 AM