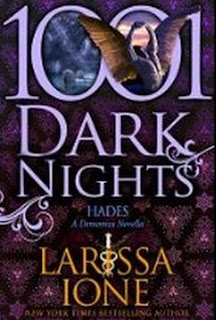 Book Blurb
A fallen angel with a mean streak and a mohawk, Hades has spent thousands of years serving as Jailor of the Underworld. The souls he guards are as evil as they come, but few dare to cross him. All of that changes when a sexy fallen angel infiltrates his prison and unintentionally starts a riot. It’s easy enough to quell an uprising, but for the first time, Hades is torn between delivering justice — or bestowing mercy — on the beautiful female who could be his salvation…or his undoing.

Thanks to her unwitting participation in another angel’s plot to start Armageddon, Cataclysm was kicked out of Heaven and is now a fallen angel in service of Hades’s boss, Azagoth. All she wants is to redeem herself and get back where she belongs. But when she gets trapped in Hades’s prison domain with only the cocky but irresistible Hades to help her, Cat finds that where she belongs might be in the place she least expected…

Hades is the jailer of the underworld and just his description of him had me wanting to see a real life Hades. His tall body and blue mohawk, not to mention how he can change the way he looks to look even ore menacing and scare the demons into answering his questions made him seem very sexy. I wouldn't have thought that the jailer of the underworld would have a soft spot but he does and we see it when he starts to get close to Cat.

Cat which is short for Cataclysm is a fallen angel who was kicked out of heaven for trusting the wrong people and making a mistake. She wants nothing more than to redeem herself, get her wings back and go back home to heaven. But this fallen angel is a mess. She breaks things, gets in trouble and while cleaning she mistakenly opens a something that she shouldn't have and instead of owning up to what she did, she tries to fix it which turns out to be the exact wrong thing to do.

She finds herself trapped with Hades and the sparks fly with these two. This might be one of my favorite books in this series. Totally worth the read.