I know on Monday's I usually post the Happy Raturday post but the lady that run's the fb page that I get the pictures from is away at school for the next few weeks so I thought I would post a rat related blog post instead. 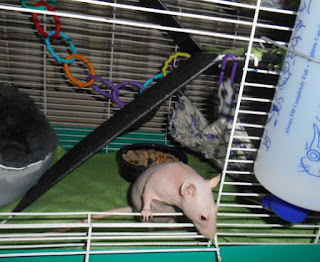 Flower has moved into the bigger cage and she's loving it. Yes, both Scribbles and Flower have been solitary rats. I got them that way and they weren't social at all and didn't like other rats so they stayed by themselves. Rats should be kept in pairs or more because they usually like the company but if they are rat aggressive to other rats, sometimes it just doesn't work out. 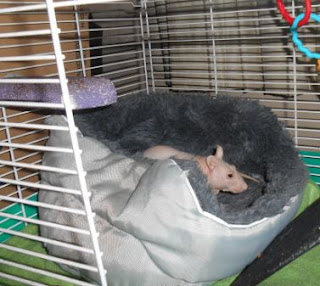 Flower seems to like one of her new beds. This is the same bed that Lucky used to sleep in and as you can see in the pictures below...he was a lot bigger than she is. lol She is my dainty little girl. 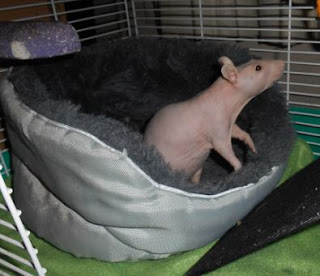 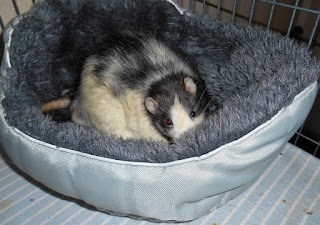 Lucky was a big boy. When people saw him, they always remarked at how big he was because he was a huge rat. Flower is so much smaller than most of the other rats I've had. 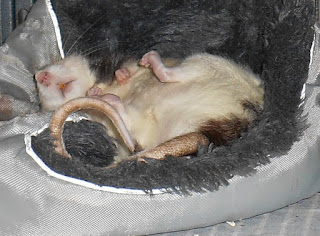 When Lucky slept on his back, he just about took up the entire bed. But Flower has a lot of room to stretch out in it. 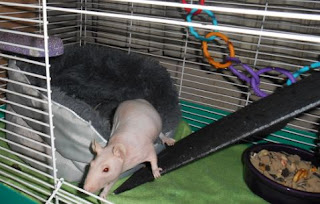 I put 2 hammocks, 1 fluffy bed, 1 hanging fleece tube, 2 lava ledges and 1 fleece cube in the cage and she went around sniffing everything before settling down for a nap. 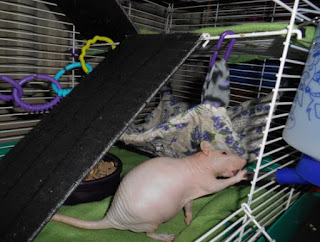 The ramps are covered so that their feet don't accidentally get stuck in the little holes in the ramp. I usually just buy big stretchy socks and snug them up over the ramps. They re easy to pull on and off and cheap enough that I can just throw them away and use a new one when they get dirty. 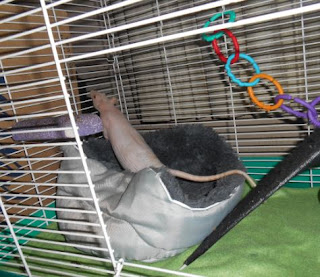 She spent a lot of time in this bed before checking out the hammocks and cube. 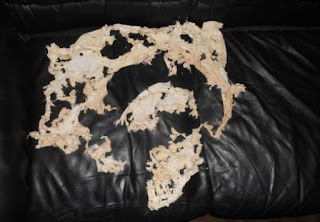 I always put a baby blanket inside her cube so she has something to cuddle in when she sleeps. This is how the blanket usually looks like after a few days. She totally destroys it! it's no wonder I am constantly buying baby blankets and shirts because she's a chewer and loves to chew on my shirts when she comes out to pay too. 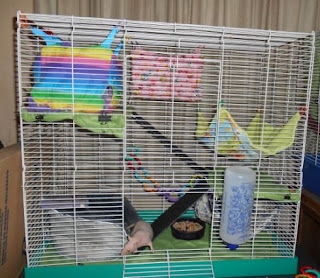 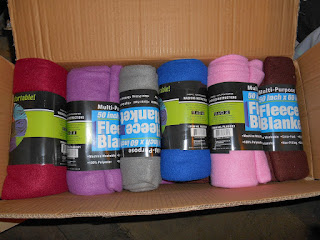 Last year I bought a box of 48 fleece throws because I used the fleece to cover the shelves in the cages as well as on the bottom on the cage. I now have 6 throws left because they love to chew they to bits. 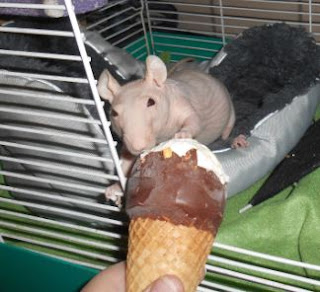 And after she got all settled in, we shared an ice cream cone.