Review: The Good, The Bad, and The Vampire by Sara Humphreys 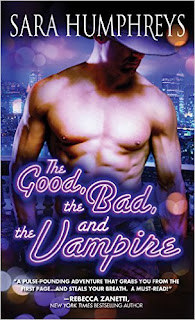 Book 4 of the Dead in the City series

Beloved author Sara Humphreys' acclaimed paranormal romance series continues with sweltering attraction between two vampires who have all the time in the world to satisfy their desires...

He wants eternity?
Dakota Shelton is a vampire cowboy with a penchant for cinnamon lollipops and Johnny Cash. Though highly skilled and deadly dangerous to his enemies, he's still a Texas good ol' boy at heart. And he has that heart set on wooing Trixie LaRoux-the most badass punk rock chick in town-the old-fashioned way.

Over her undead body...
Trixie is tough as nails and sharp as a silver stake-the last thing she wants is a man to sit on a porch and not grow old with. So it'll take going to hell and back fighting a new threat to vampires before she admits Dakota's courtship makes her blood hum. Turns out chivalry's not dead after all.

I knew I wanted to read this novel by an author who has written quite a few of my favorite paranormal stories, so when I saw it was available on Net Galley I asked for it and got it in exchange for an honest review.

I've really liked Trixie and was so glad to see her get her own story. Trixie had a really bad life as a human and in her brief time as an adult she was an addict and did some questionable things, things she's not proud of and would rather not have her vampire coven know about. She is spunky, sassy and seems happy in her vampire like but she has secrets and when Dakota follows her to the pregnant human's house out in the woods, one of her secrets gets found out.

Dakota is a smooth talking cowboy but he's also a Sentry which is the elite vampire police force.  Dakota and Trixie have feelings for each other but Trixie is not ready to face a relationship just yet. Dakota and Trixie seem to be completely opposite but sometimes opposites attract and it was enjoyable to watch their romance unfold.

Throw in some gargoyles, witches and a huge lie that was told to Dakota that tricked him into believing things that weren't true and you have a story with a lot of twists and turns. If you'd like to buy this for yourself, you can find it here.