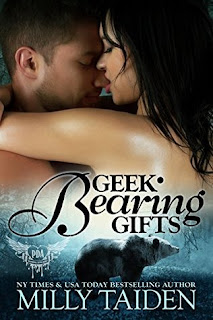 Nita Islas wants to find love. She's tired of the superficial relationships and is ready to give true romance a try. She uses the Paranormal Dating Agency and hopes they can help her where all others have failed. What she didn't expect was to find her date flat on his back in nothing more than a towel.

Ky Stone has been in love with curvy and funny Nita since they were in High School. When she moved away, she took his heart with her. Then one day Ky wakes up to find her leaning over him. He's sure he's died and gone to heaven. He has no idea what she's doing there, but he's sure as hell not letting her leave.

Fate, meddling family and the PDA have brought them together again. The chemistry between them is explosive. But there's problems with Ky's neighboring clan and he's keeping secrets from Nita. He needs to find a way to open up to her or lies and unexpected danger could tear them apart... forever.

I knew as soon as I started reading the first book in this series and Nita had talked about the Bear Shifter that she had been friends with when she was younger, that there would probably be a book about her meeting him again in her own book, and I was right! I was really looking forward to this book and it really didn't disappoint at all.

Nita was heartbroken when she had to leave her best friend when she was younger when her family moved away. She had a huge crush on the guy but she was too shy to let him know it. After not finding the guy of her dreams on her own she asks Gerri Wilder the match maker to find her a date and Gerri doesn't disappoint.

Ky's sister set him up on a blind date without letting him know beforehand what she was doing and he was really mad about it but even madder that someone had hit him and knocked him out right before his blind date was about to show up and that's how she found him. Knocked out and half naked on the kitchen floor.

Ky recognizes her right away, her scent, her voice..everything. She was his, his mate. But for some odd reasons, she doesn't seem to recognize him at all. Does he look completely different than he did 17 years earlier? Could happen I guess. He was a shifter so I imagine they change as they get older and he's not the skinny, shy teenager he had been, so it's possible she doesn't recognize him now. He was the Chief of the Stone Bear Clan now.

I really liked the chemistry between these two but I found it a little irritating that Ky didn't tell Nita right away who he was. I mean, why keep it a secret? It was going to come out at some point anyway and by that time she might be mad that he hadn't been up front with her, I know I would have been.

There's a little drama with a neighboring bear clan who want the river that in on his land but it isn't anything that takes up a lot of time during the book. I like that this book was all about the romance, these two getting to know one another and lots of hot sex. If you'd like to read this for yourself, you can find it here.