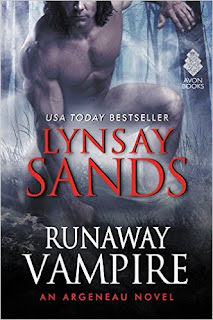 Dante Notte has heard it said that love hurts. He just wasn’t expecting it to run him over in an RV. Still, a punctured lung and broken ribs are nothing compared to the full-body shock he feels whenever he’s near the vehicle’s driver, Mary Winslow. He needs to keep her safe from their pursuers while he rescues his brother. Most challenging of all, he needs to claim this smart, stubborn woman as his life mate.

The naked, injured, insanely gorgeous younger man who clambered into her RV insists they belong together. If Mary wasn’t feeling their incredible connection in every inch of her being, she wouldn’t believe it. But now that the men who took Dante’s twin are after her too, trusting her gut means risking her life for an immortal who’s the very definition of a perfect stranger.

Dante is on the run and in search of his twin brother who's been kidnapped. He's on the run...literally and runs right into an RV that runs him over. If he hadn't been immortal, he would have been killed. But then, if he didn't have the powers he has like speed, strength ect, he wouldn't have been running fast enough to be hit by the RV in the first place. After getting hit and the RV stops, he climbs into the back of the RV and sleeps until he can get more blood in order to heal himself.

Mary is in her 60's, her cheating, no good husband died not too long ago and she's taking her last RV trip alone. While I felt badly that her husband passed away, I think she's better off without him. He cheated, and even had kids with the women he cheated with. Ugh, what a winner.

If you haven't read this series, here's the back story on Dante's people. His ancestors are from Atlantis and the scientists made nanos that help their people stay young, strong and healthy. But in order for the nanos to work, they need blood. So while Dante isn't the usual type of vampire, he drinks blood and is immortal. The way they drink blood is even cool. Their fangs descend and they slap a bag of blood onto their fangs. The blood is then sucked into the body via the fangs. They don't have to actually drink the blood.

While I liked that Mary and Dante got time to get to know one another, I did find the first half of the book rather slow and boring. Things didn't really start to get exciting until about half way through the book and then it was a much easier book to read. I've been reading this series for quite a while, so when I won this book in a blog contest I was thrilled. Now I'm glad I didn't buy it because while it was ok, it wasn't a great addition to the series. One of the other things that bothered me was there really wasn't much going on in this story. Dante's brother has been kidnapped and he's searching for him but they really don't do much searching or trying to do anything other than get away from the bad guys chasing him. And they don't find his brother by the end of this book. If that gets added at the beginning of the book, then it's one of the plots of the book that should be wrapped up by the end of the book. At least in my opinion. If you'd like to read this book yourself, you can find it here.