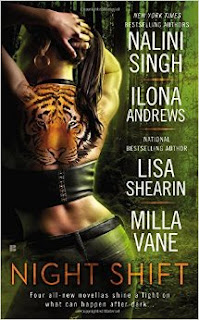 Four masters of urban fantasy and paranormal romance plunge readers into the dangerous, captivating world unearthed beyond the dark...

New York Times bestselling author Nalini Singh delivers a smoldering story with Secrets at Midnight, as the scent of Bastien Smith’s elusive lover ignites a possessiveness in him that’s as feral as it is ecstatic. And now that he’s found his mate, he’ll do anything to keep her.

From Milla Vane—a warrior princess must tame The Beast of Blackmoor to earn a place among her people. But she quickly discovers that the beast isn't a monster, but a barbarian warrior who intends to do some taming himself.

It’s seer Makenna Frazier's first day on the job at Supernatural Protection and Investigations, and her first assignment is more than she bargained for when bodyguard duty for a leprechaun prince’s bachelor party goes every which way but right in national bestselling author Lisa Shearin’s Lucky Charms.

Secrets at Midnight by Nalini Singh was one of the best stories in this anthology. Bastien keeps getting a whiff of the scent of his mate, but then it's gone again. It's only when they meet face to face that Bastien and start getting to know one another that he figures out she isn't completely human like she thinks she is. This was such a sweet romance and it even made me misty eyed a few times when Kirby finally finds the missing pieces of her past.

Magic Steals by Ilona Andrews was so much fun. Jim and Dali are just perfect for each other. Dali is a tiger shifter but she's also a vegetarian. That is just part of the fun. Jim is fun and helps her as she tries to figure out who is using magic to kill or try to kill people. The reason why was interesting and the story line for this was not something I was expecting, but it was fun.

Lucky Charms by Lisa Shearin had all sorts of creatures in it. Gargoyles, leprechaun's, large man eating worms, goblins and dragons were just a few of the crazy creatures you'll find in this story. Mac is hired to help track down a leprechaun prince and his buddies who have escaped from their protective detail. Mac is a seer and can see through the glamour that they use to keep themselves hidden from humans. This was a fun story, my only complaint was the ending. It turns out someone is killing or trying to kill the seer's this company hires and that story line never gets wrapped up. I'm guessing it will in the next book but it was kind of a cliffhanger to me.

The Beast of Blackmoor by Milla Vane started out a little slow for me but quickly picks up after Kavik made the goddess mad and he is cursed. Later he meets Mala who is on a quest for the same goddess he pissed off and they realize that their fates are somehow wrapped around each other. This is a very dark and gritty story. After reading the other three and getting a fun feeling from them, I was a little shocked to find this in the mix because it's nothing like the other three and it really didn't seem to fit, at least not for me. It's not a bad story if you like this sort of thing but it really wasn't my favorite.