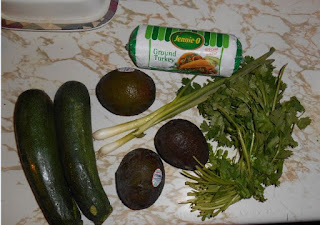 About a year ago I made this exact same recipe but with ground chicken. I wanted to make it again but the butcher in the meat department of my grocery store refused to grind up a pound of chicken for us. He said it's a specialty item and they only sell it when it's on the shelf, they won't grind it up individually. So Ken asked when they might get some more in and the idiot actually said that they don't order it anymore because no one buys it. *headdesk*  But he was nice enough *note my sarcasm* to point Ken in the direction of the ground turkey. So Ken called me on his new cell phone *All the damn time when he's out. It's annoying.* and asked if ground turkey was ok. So I tried it and thankfully it came out just as good as the ground chicken but they don't stick together as easily as the ground chicken did. I'll have to tweek this recipe and either use less shredded zucchini or some bread crumbs to keep it from falling apart. They were tasty though. I'll definitely be making these again.

After grating the zucchini, put it in a metal colander or food strainer and squeeze out as much moisture as you can. Otherwise the water will leak out in the pan when frying them. 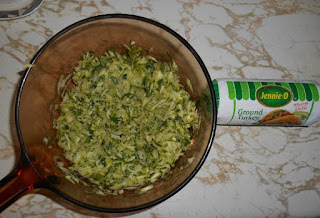 Mix together and drop by small spoonfuls into hot olive oil on pan. Flatten out a little with spoon if they don't spread out on their own. Then leave them alone and don't try to turn them for 5 minutes or they will fall apart. Fry on each side for 5 minutes. Serve with guacamole dipping sauce. 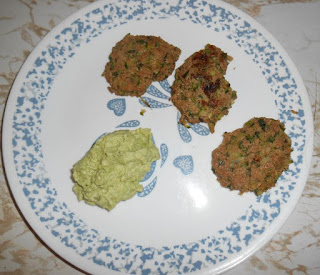 And when the hell did ground chicken become a specialty item? I could see it if I asked for ground filet mignon or ground lobster but chicken? I think they just had an excess of those chubs of ground turkey and wanted someone, anyone to buy some. lol
Posted by Mary Kirkland at 12:00 AM