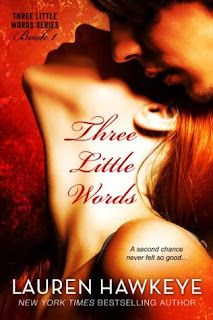 Three Little Words quickly becomes Two Hot Choices, but Adele doesn’t know how to choose just one when they both help to ease her pain...and fuel so much pleasure.

Adele is a nursing student who likes to go to the law library to study. Mal has been watching her and sneaking glances at her while she's there but she knows he's been watching her. They both have the hots for each other but Mal is too shy and nervous to say hi to her. Adele makes the first move and asks Mal over for coffee one day. Even though she's surprised he accepted, she's also thrilled because she likes him.

I liked watching these two get to know each other and find some common ground, something neither one of them thought they'd have. But just as everything is going great, Boom! there's a misunderstanding and everything goes to hell.

Fast forward 2 years later and Mal has told his father to get stuffed and dear old dad cuts off the money. So Mal gets an apartment with his friend Dorian and is scraping by but he's happier and still in law school. Wouldn't you know it that when Mal moves back to the town he did his undergrad work to continues his studies, he comes face to face with Adele.

What Mal doesn't know is that Adele has drastically changed. She dropped out of nursing school, works at a cafe and doesn't date because of something bad that happened to her while they were apart.

There ends up being a bit of a fight for Adele between Mal and Dorian. Both want her and she wants both of them. Dorian was different than I expected but I really liked that about him. He brought a few exciting and interesting scenes to this story. I really liked how this one ended, even if I did see that little twist coming.

And then there's the stray cat. This cat was hilarious and damned naughty. I laughed every single time the cat showed up because I knew what it was going to do. One of them thought that the cats name should be Humper, so that should give you an idea why this cat was funny.