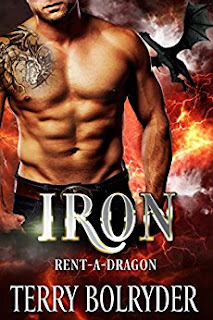 A Dragon Mechanic? Unheard of.

Unless you're Magnus Ironside, a metal dragon who just awakened in the modern world and happens to be obsessed with cars and their inner workings. Add in the fact that his mate just walked in to hire him to work at her auto shop, and Magnus is one happy dragon. Now he just has to flex his pecs, show her his huge 'axe', and everything will work out, right? Wrong.

Lindy Dunn doesn't have time for a relationship, not while she's working herself to the bone trying to make ends meet. She doesn't have time to notice the huge muscles or gorgeous, jade-green eyes of the oddly sexy handyman she just hired. No matter that he's seriously good with cars, and fun to be around. With someone sabotaging her dad's shop, it's not the right time to fall into any man's arms, even if it's someone as capable as Magnus.

Magnus knows he can win over Lindy, as long as he doesn't move too fast with talk of dragons and destiny. The heat between them is too blazing to deny. But though Magnus thought he'd left the past far behind him, one big storm is still approaching, bringing a dark figure that threatens to destroy everything the iron dragon holds dear.

Magnus is fighting some demons and nightmares. He blames himself for their ship going down in a storm because he built it and thought it couldn't be brought down by a storm. They all could have died and stayed dead if they hadn't been found and Magnus blames himself for that fact. But all is not as it seems.

Lindy needed someone to work on her car as well as a few other things, it had already broke down once at night and Magnus stopped to help change her tire. She sped off before he could even get a number so imagine her surprise when she goes to hire a Rent A Dragon and Magnus is the one picked to work on her car and in her shop.

These two were so funny together. Magnus wants to get to know her better, hang out with her and have fun. But Lindy is all about her job and not interested in a relationship right now. Her dad died and left her his shop but the shop is being vandalized and she is in great need of help. Another shop in town wants her to sell her shop to them and things get dangerous when she refuses. Good thing she now has a big dragon shifter to help her out and hopefully scare away the bad guys.

There are other dragons out there and not all of them like humans and some of these dragons are down right dangerous. But Magnus has several dragons that he lives with in the castle and I loved how they all get along and the great banter that goes on between them.

I've been devouring this series because I've really loved reading the stories and getting to know these dragons and their mates. I'm really looking forward to the next book as well.