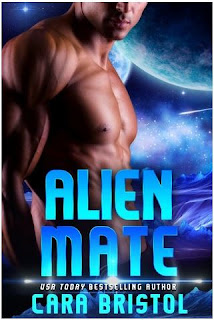 I'm Starr Elizabeth Connor. Earth's government falsely convicted me of a crime, packed me on a ship with other female felons, and sent us to Dakon, a primitive, frozen wasteland of a planet. Why? Earth needs minerals, and Dakon is desperate for females.

I am Torg. I have waited 34 rotations for a mate of my own. With this shipment, I was sure to get a fine, sturdy mate who'll bear me many daughters. Instead, I receive a small, curvy, pale-haired female who looks at me with anger and fear.

It is only when we 'kiss' that I believe things may work out between us. But I'm hearing rumors that Starr and her shipmates are law-breakers. To survive, Dakonians must obey all laws … or be exiled into the frozen wasteland. Just when I have found her, will I have to send my mate to die?

I'm a huge fan of alien's and alien planets in books so when I read a couple of reviews for this one, I knew I had to read it and I'm so glad I did because it was really good.

Starr was falsely convicted of murder and put on a space ship with other convicted criminal females and sent off to an alien planet to be mates for their males in exchange for the alien planets minerals that Earth wants. But the Dakonians don't realize they are being sent criminals or that all the women with the exception of Starr were given a choice to come and be mates or serve out their prison sentences.

I loved Torg and his brother. He's such a great character and even though he had in his mind what he thought he'd like for a female, he made things work right from the beginning and I really liked that about him.

Torg's planet is a frozen mess after an asteroid destroyed so much of it and killed off most of their females but I really liked how they fought back and were making things work. I also liked how the Dakonians were so compatible with humans but there were small differences between the two races. While they were able to communicate because of a translator, the different phrases or words that they weren't able to understand completely made communication quite funny at times and I love it when a story can make me laugh.

There are some problems that arise because some Dakonians don't think they should be polluting their gene pool with other races and there's also other complications because of jealousy but I liked how things were worked out and the conclusion was quite good. There's also a bit of a mystery of who is trying to hurt whom and why and there's a great twist that comes with that story line.

While things didn't work out as either of them had expected, this story made for a really good read and I am really glad that I went with my gut and tried this new to me author.