So these pictures were taken back in 2013 and back then I didn't have the better camera that I have now so the pictures didn't come out as clear as I would have liked but you can still see what I'm talking about. 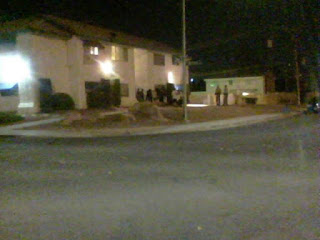 The police were at the end of my street talking to about 15 people in the apartment complex across from mine. 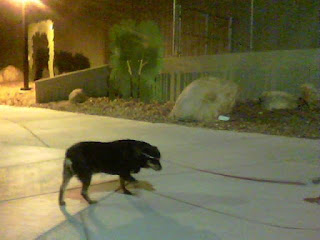 There was a lady outside walking her dog when I was snapping pictures of the cop cars and she almost got me arrested *maybe*. She started loudly saying that, "As soon as cops get a badge they think they can do what the F*ck ever they want. They should go find an all night donut shop and I have an authority problem." Yeah no kidding, I couldn't tell at all.

I said have a good night and got the hell away from this psycho before the cops came over to shut her up and maybe thought I was with her. 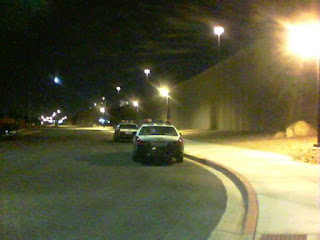 But in the end, no one was arrested and after they were done with all the people the police stood around talking to each other for about 30 minutes. As you'll see over the next few weeks, the police are in my neighborhood all the time. People always seem to have disagreements with their neighbors in apartment complexes. Maybe because we're all so close to one another and it gets on each others nerves when the neighbors are loud, annoying or disrespectful. We've lived in this apartment for 20 years and we've never had the police called on us.